The global banking system has many regulations and rules that govern it. Each responsible lender must adhere to these rules on a daily basis. When it comes down to it, though, it is clear that some banking officials have a complete disregard for the rules. Much of the time, these people ignore the regulations so that they can profit. Their activities are both illegal and unethical. The customers trust each bank to have their best interests at heart, but they are all too often wrong to do so. 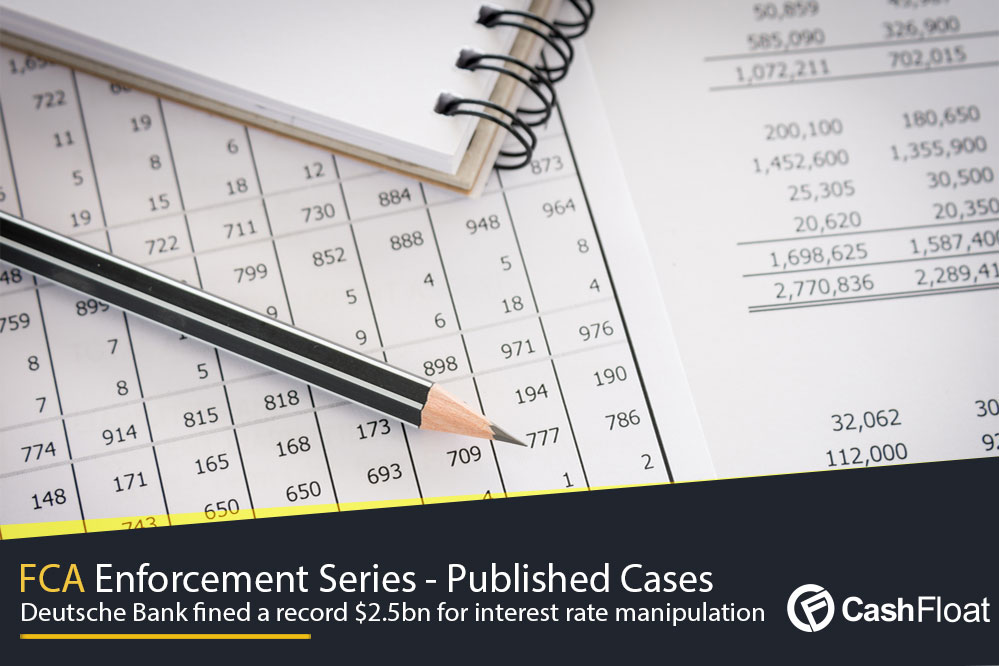 One of the biggest trends in banking scandals seems to be the rigging of various rates. Of course, each bank has to pay attention to the current rate, yet some try to manipulate it. While they might get away with this error for a while, it will eventually come to light. There is often a paper trail that leads back to the officials.

The average customer knows a little about each bank, although they won’t have had much contact with them. They may know them for their payday loans or affordable cash offers. The unethical practices go much deeper than these issues, though, and they are hazardous. In fact, they could change the way people seem mainstream banks forever. The Cashfloat team investigate scandalous cases of financial misconduct by such banks in the UK. By understanding the lessons learned, we can apply them to our own code of practice. Let’s take a look at the recent Deutsche Bank scandal of April 2015.

Based in Frankfurt, Deutsche Bank is one of the leading German banks. Around the world, it is famous for being one of the real market leaders. In fact, many people view this company is the most precocious bank of our time. The bank now has bases all around the globe, with offices in New York, Zurich, Pune and Dubai. There are more than 100,000 staff members currently working for this massive corporations.

While the bank has a strong reputation, they tarnished it this year. The latest banking scandal shocked many people in the financial sector.

What is the Libor rate?

To fully grasp the importance of this story, you must first understand what the Libor rate is. The acronym stands for London Interbank Offered Rate. When banks trade and borrow with one another, they have to abide by this rate. Many people say that this rate sets the bar, and everyone must adhere to it. So that each global bank offers affordable cash to other corporations, they have to take note of what the current Libor rate is. There are seven different borrowing periods, ranging from just one day to an entire year. Each period has a separate Libor rate that applies to it. As you might imagine, each bank official has a duty to pay attention to the current Libor rate. No one should tamper with this interest rate, regardless of their motives.

In April 2015, it came to light that there had been a series of scandals involving Libor rigging. The German bank was at the forefront of this form of misconduct. Staff members decided to manipulate the rate so that they could make profits on the bank’s behalf. Each day, the banks release their rates and what interest they plan to charge. The banks should not consult with rate submitters when it comes to it, yet some do.

The crux of this scandal is that traders at the Deutsche Bank communicated directly with the rate submitters. One of the main pieces of evidence was an email exchange between two parties. Here, the trader asked the submitter to give them a high six-month rate. They hoped that in doing so, they would gain more profits than they usually did. Of course, the emails are highly incriminating. After an FCA investigation, it was found that there were 29 people who took part in this scandal. The incident was so widespread, in fact, that some people high up knew about it.

Something that is suspicious about this case is the fact that the bank destroyed 482 tapes. These tapes had information on them and recorded phone calls. Each of the tapes could have been evidence, yet the banking group says that they made an error in destroying these tapes in the first place. The officials also gave the FCA false information, claiming that no other evidence existed. When the regulator found that this statement was, in fact untrue, it only made the case worse than it already was.

Could the FCA have prevented this issue?

Many experts are speculating about how the regulatory services could have prevented this case. Of course, there are more things that the services could have done to make sure that this case never happened. Having said that, the FCA don’t have the jurisdiction to keep track of external communications. That is to say that they can’t look at these emails until they believe that there might be an issue. All the FCA can do is make sure that each affordable lender is aware of the regulations and the consequences of ignoring them. The services often show companies what will happen if a corporation breaks the rules.

First of all, the US regulators fined the Deutsche Bank $2.1 billion. They also told the bank that they need to fire seven employees who still work for them. While the bank has already dismissed many of their staff members.

The FCA fined the bank £227 million after a thorough investigation into this issue. They said that there was a “deeply ingrained” culture of manipulation in the bank itself. That is to say that individual staff members encouraged others to make sure that they reached targets regardless of the rules. The FCA found that the misconduct took place between 2005 and 2009. They also ordered the bank to dismiss the employees who had a level of involvement in this case. The scandal was so massive that it affected even short-term loans between banks, which meant that it was a real problem.

While the FCA could have done more here to prevent this case, they had no idea about the scandal until the story came out. This bank covers every area of the financial world, from payday loans to massive banking deals. It is crucial that the regulators keep a close eye on the rates at the moment. In recent years, there have been a few instances of tampering with these rates, which should never happen. In the future, it would be wise to regulate this area in a more thorough manner than they do now.