Sindicatum Holdings was not controlling its financial affairs sufficiently. As such, was investigated for money laundering controls. Cashfloat, a direct online lender reviews FSA investigations. 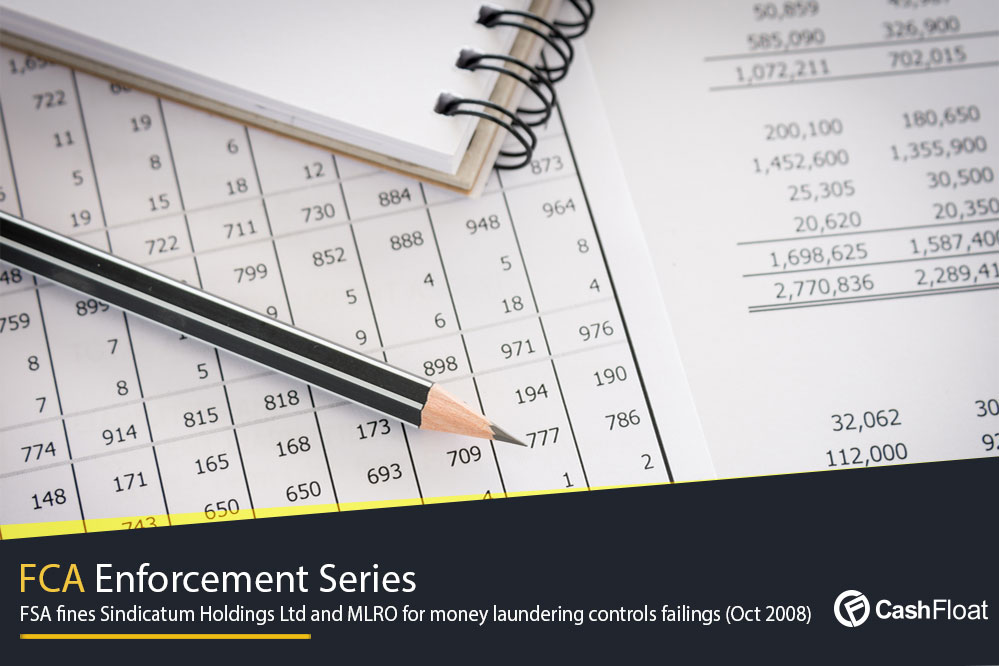 Money Laundering in the UK

Money laundering has always been a significant issue in the UK. But, when larger scale companies are found to be engaging in this criminal activity, the ramifications can be severe. As such, when it comes to money laundering, many companies have stringent financial regulations in place. After all, one wants to suffer at the hands of a PR scandal. But, not all financial companies have been as upfront and honest about their financial affairs.

The case of Sindicatum Holdings is a good case in point. The company was found to be in breach of controlling its financial affairs. As such, the company was investigated for money laundering controls.

The Cases of Sindicatum Holdings Limited (SHL) in October 2008

During the October of 2008, Sindicatum Holdings Limited was found to be in violation of having the appropriate controls in place to prevent money laundering. Sindicatum Holdings, a company dealing with sustainable energy, was fined a total of £49,000 for this misconduct. What is more, SHL had a money laundering officer within its remit. The MLRO, Michael Wheelhouse, was also fined £17,000 as an act of personal accountability. The FSA investigation found that the company and the MLRO did not have the adequate controls in place to recording client’s identity. As such, the company were found to lack the necessary anti-money laundering controls that are required for all businesses in the UK. A lack of checks resulted in client’s accounts and identities not being verified to the required standard.

The case of Sindicatum Holdings can be deemed as a landmark case of its time. In this instance, it was the very first time since the creation of the FSA that an MLRO had been fined. In terms of personal accountability, it seemed that Wheelhouse had lacked to implement stringent checks to safeguard and protect its clients. As such, it left its customers wide open to a series of financial risks that could have had a severe impact on their personal finances. A lack of verification controls can be costly to a consumer of financial products. Should verification processes not be in place, it leaves the customer susceptible to the risk of theft and fraud. But, it can also leave a company open to the threat of issues surrounding money laundering.

What Did the FSA Investigation Find?

The FSA found, following its investigation, which the company failed to verify the identity of their consumers. They lacked a basic implementation of the appropriate processes that are needed to protect consumers.

But, this was not the only issues. Aside from failing to implement verification methods, SHL also failed to identify the identity of its customers. SHL had ignored the appropriate processes that are required when handling client’s financial information. Largely, they had also failed to record and audit the verification procedures that are needed by companies.

As we’ve already mentioned, the case was a landmark in some ways. It was the first time that an MLRO had been fined. As such, Mr. Wheelhouse was fined the appropriate sum by the FSA for his failings within the company. The FSA ruled that Wheelhouse had not taken the correct steps to install a policy and system to protect consumers against the onset of financial crime. While it was found the money laundering had not taken place within the firm, there has been a lack of control. This lack of control opened the doors for serious financial risks to both the company and its consumers.

Integrity of the UK Financial Market

Following the investigation, William Amos, head of the FSA’s retail enforcement team, stated that he had concerns about the company. He stated that the integrity of the UK’s financial market has been at risk. As SHL had failed to implement procedures, the company has left itself vulnerable to attack from criminals. As such, it is deemed as an essential process to ensure that businesses of all financial products meet the guidelines of the FSA to safeguard clients. But, these processes are also important as it ensures that businesses are compliant. The FSA deemed their fine as a ‘warning to other firms’. At the heart of the ethos of the FSA was the need for compliance. As such, it was seen as a deterrent to other firms to follow and implement the right processes within their business. Should a company fail to do this, much like the case of Sindicatum Holdings, a company will be fined, and heads of departments will be held personally accountable.

The fine, however, was deemed as a small sum. According to the FSA, this was done as the company had limited financial means.

Following the investigation into the company, both Sindicatum Holdings and Wheelhouse were diligent in implementing new controls. They used the findings from the review to ensure that systems were tightened and subject to greater controls. This was done in a bid to resolve the issues and to safeguard the business against the onset of financial crime.

What Could the FSA Have Done to Prevent This Issue From Arising?

Largely, the FSA had a rule book of guidelines that all UK businesses should have adhered to. But, the FSA is not capable of making laws and regulations. As such, its rule book can be used a loose guideline instead of a legislative material that companies must abide by.

The issues surrounding SHL show that the FSA must be more proactive in its stance towards businesses and controls that they have in place. SHL had failed to have the basic verification methods in their company. The FSA claims to be diligent when it comes to protecting the interests of consumers. But, companies are often left to their own devices when implementing policies.

The FSA has been subject to reform. The new and improved FCA and PRA are said to have a much more proactive approach to businesses. The rules that have been updated within the financial industry can ensure that companies are complying with the rules as espoused by the regulatory body. The FCA is said to be handing companies much larger fines for their financial failings. As such, this can prove to be a cautionary tale to other businesses that have dangerous gaps within their company’s policies.