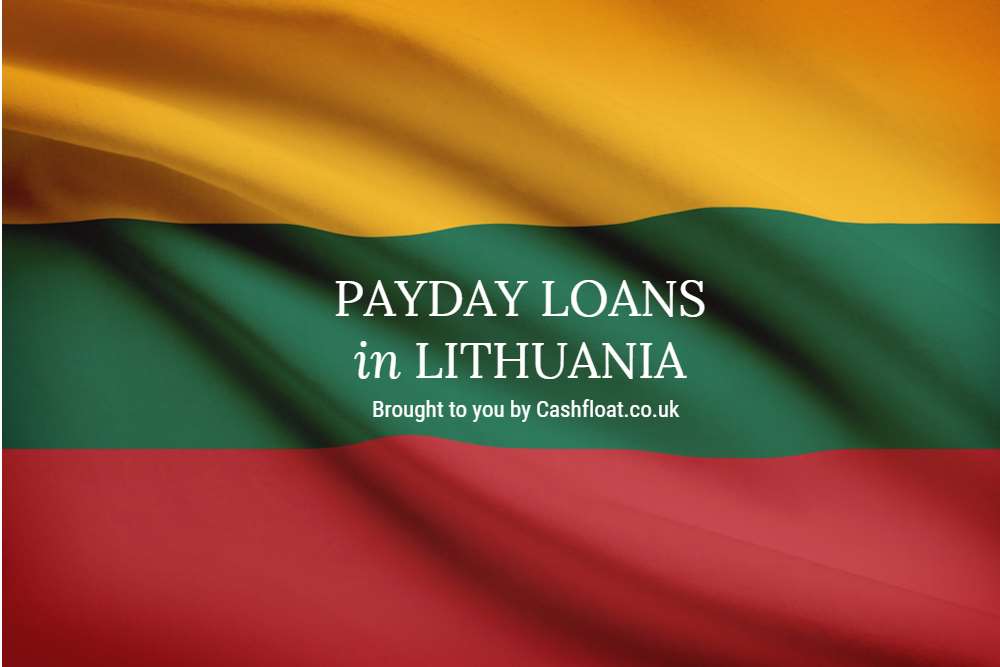 Have Payday Loans in Lithuania Increased or Decreased?

Here are some summary points from the industry overview, which are later explained in more detail: 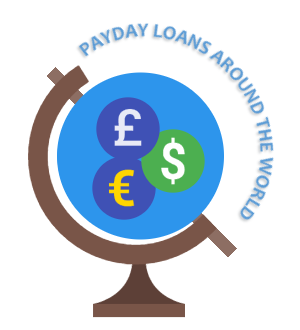 According to Lietuvos Banks Eurosistema news (February 2016), at the end of 2015, the first signs of change were seen in the payday loan market. Slowly, the market is becoming more sustainable, and, therefore, more responsible. During the final quarter of the previous year, the amount of loans provided by consumer credit organizations to new credit consumers dropped by a tenth. Payments overdue grew at a slower pace.

Lietuvos Banks Eurosistema published two overviews about the changes in payday loan market. The last one is from 6th September 2016 for the first half of 2016, and the other one is from February 2016 in review of 2015. Below we present the two publications.

According to the article titled “Changes in payday loan market – more responsible lending, fewer indebted” in the first half-year of 2016, the volume of payday loans in Lithuania decreased by two-thirds, year on year. Credit lenders assessed customer solvency more responsibly. For the first time in history, overdue loans reduced in number.

The Chairman of the Board of the Bank in Lithuania said that three factors contributed to these trends;

All of these changes help to prevent the overdue loan repayment burden and lowers the risk of the severe social repercussions that follow.

In the first half of 2015, approximately 40% of applicants were granted a payday loan; year on year, the amount of approved applications reduced to 26%. In mid-2015, young persons accounted for approximately 30% of total customers of payday loan companies. Now that figure has declined by nearly a quarter to 23%.

Year on year, the amount of credits overdue for 30 – 90 days reduced by more than a third or 34.9%, leading to a first-time-ever annual contraction in the volume of overdue loans.

We will now present some more interesting statistics from the Study of the Payday Loan Borrowers in Lithuania which we will be elaborate more in costumer characteristics. The payday lending industry grew tremendously fast from the very beginning. The analysis of that top 3 payday lenders (who represent 80% of the market) shows that starting from almost nothing in 2007, they have reached more than 100 million LTL (almost €29,180,000) of interest income in 2012. The overall portfolio grew by more than 80 % in 2011 and 32 % in 2012. 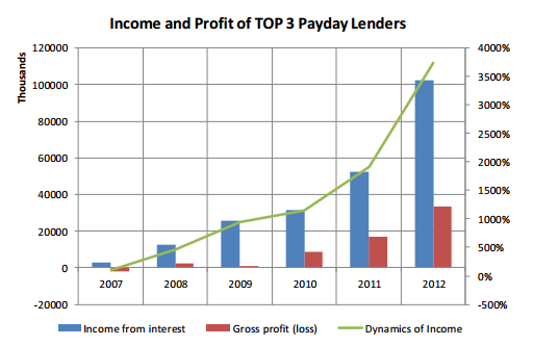 Comparing to the mainstream lending, these are relatively small numbers. However, such income has been compounded from the loans, the average amount of which is was approximately 386 LTL (€113), with APR of 100% in 2012 and 2013. There have been almost 800.000 credit agreements made per year in 2012 and 2013. That makes almost 34 credit transactions for every 100 persons of legal age (18 and more) in Lithuania.

According to an analysis for the specificities of pay day lender products and industry, in Lithuania, 39% of all payday borrowers are under the age of 25. The first figure of rolling over is found to be as high as 37%.

After looking closer at the advertising tactics used by payday lenders in Lithuania, they are aggressive and create inadequate expectations to the consumers, offering gifts and discounts for loyal customers. Below are some examples:

The list goes on with different discounts and incentives. What is worth mentioning is that 9 out of 29 lenders checked, offer the first loan for free thus making lending more appealing to the consumer. 6 out of 29 work late at night which can often lead to alcohol and gambling caused decisions.

The small loans market often gets a lot of criticism. Critics’ state that the market has too little supervision; that the industry does not properly assess the ability of customers to repay their loan and that interest rates are artificially high. In October 2013, the Lithuanian Central Bank introduced a new amendment to consumer credit law under the Ministry of Finance. Parts of these amendments are very strict, and their implementation will have a significant negative impact on the consumer credit market. This impact will be felt not just by financial providers, but by their customers as well, as access to consumer credit becomes more difficult.

In this chapter, we analyse costumer characteristics in Lithuania. The Study of the Payday Loan Borrowers in Lithuania is the framework of our analysis. It uses data from an extensive payday borrowers’ survey, conducted in Lithuania.

According to the numbers provided, the general population of payday users at the beginning of 2012 was 22,000. To carry out this survey, data was collected from three payday lending companies who spread the questionnaire among their clients. There were 90,233 invitations to conclude the on-line survey between 5th December 2013 and 13th January 2014. 2,776 users started answering the questionnaire, although only 1734 actually completed it. 183 respondents had used the service over 12 months prior. Below we present some of the findings: 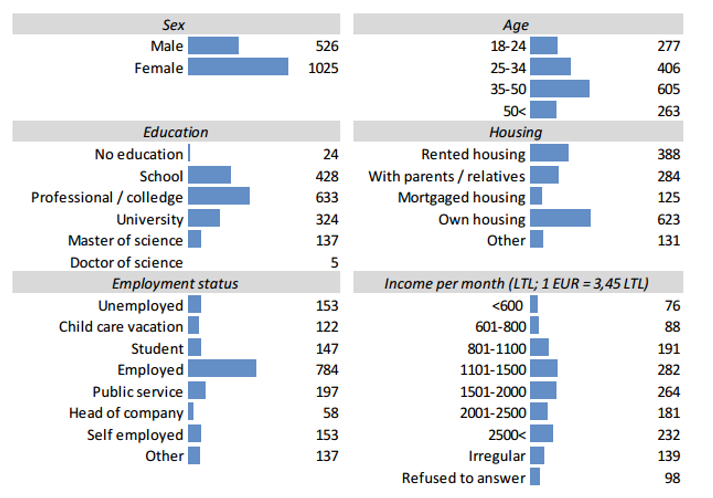 Another point to consider is the frequency of using payday loans and ability to repay. Most payday borrowers are frequent users, turning to this type of credit once per six months or quarter. Most of the borrowers do not have any difficulties in covering regular expenses, and they don’t consider themselves being impulsive. Results are in the charts below:

Borrowers were asked which of the following they would choose when taking a 400 LTL loan for a 14 day period: 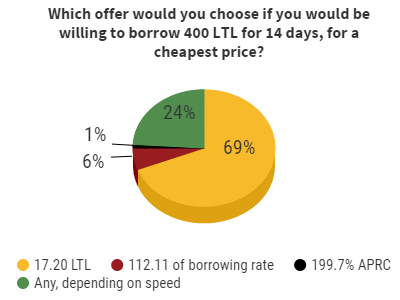 The chart presents the answers to this question. Most borrowers chose the cheapest offer of 17.20 LTL with 69% choosing that option.

Additionally, 51% of borrowers strongly agreed with the statement that they asked for a loan because of its’ cheap price, although it is well known that such kind of credit is the most expensive one in APRC terms. In response to this unusually high percentage, we have looked at the education of the respondents who had made them. We found that the borrowers with the highest education made up the highest percentage of those who ‘chose short term loans because of its cheap price.’

Moreover, below are some further comments from respondents:

This evaluation seems to confirm that in general borrowers carefully consider their abilities to borrow and repay. 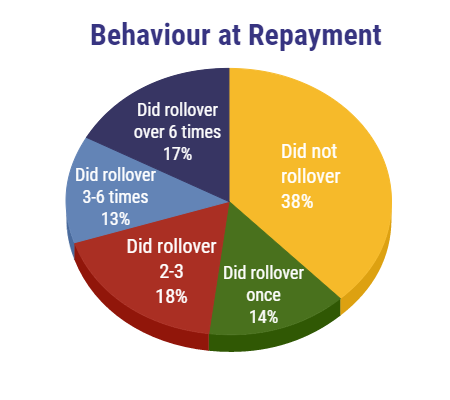 We also researched whether our respondents rollover their payday loans in Lithuania, what sources have been used to repay them, and how much in general they can afford to pay every month for principal and interest, without diminishing their regular expenses. The results revealed that only 38% of borrowers do not extend the terms of the loan. Others rollover their loans in different frequencies from 1 to 6 times and more.

Competition for Payday Loans in Lithuania

While screening the competition we searched for payday loans online, and came across allcredits.lv site which comparison the credit companies in Lithuania. The short term direct lender, fast credits listed are:

Isla Williams
A born writer, Isla had her first article published at age 9 in a local magazine. Isla's joy emerges when pen strikes paper, and she can tap into her creative self. "I love to share knowledge/information and help others to be in the know while being as friendly as I can.” Isla is an accountant by profession but has taken a break to do what she enjoys most - writing.
Related posts
Technology & Innovation
How to Compare Credit Cards and Make the Right Choice
Loans and Lenders
How to Look For the Perfect Payday Loan
Money & Borrowing
Discover the True Cost of Borrowing Money