Is there a difference between short term and payday finance? 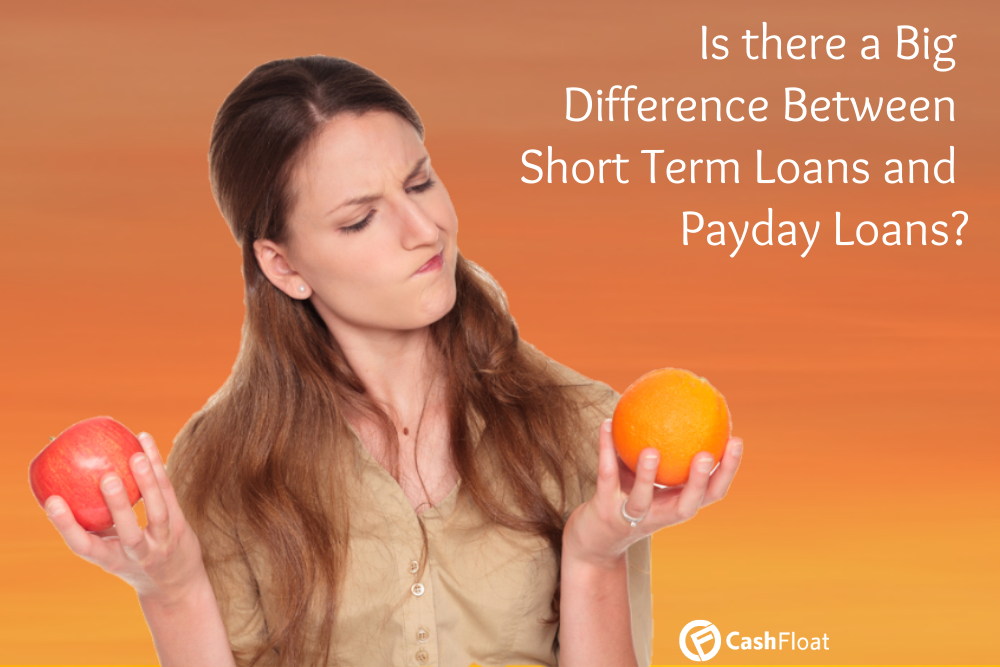 
Cashfloat is an FCA authorised lender offering several unsecured credit options. We lend amounts between £300 and £1,000 to applicants who meet our affordability checks. You can apply online, taking just a couple of minutes to fill out the application form. We are UK based, and our loans are safe and affordable. In this post, we aim to explain the difference between short term loans and payday loans. You might think short term loans and payday loans are different, but they have quite a few similarities. In fact, many would argue that there is no ascertainable difference between the two. Some would prefer to note a payday loan as just one other form of a short term loan. To understand if there are any fundamental differences, we first must establish what a payday loan is.


The Differences Between Short Term Loans and Payday Loans

Loan Duration: A payday loan from a direct lender is a loan that borrowers can take out and use their next paycheck as capital. Essentially, the idea is that if you don’t have enough money to pay for what you need that month, you can take out a payday loan. You can then buy or pay for what you need and pay it back when you next have money. It sounds simple, and that’s because it is. Payday loans are not intended to be used for long periods of time. Rather, they are expected to be paid within one month or typically, under ninety days. Due to this, they often have high levels of interest attached. However, there are currently proposals to cap interest on payday loans. In some countries, there are already restrictions.

As you can see, the main difference with payday loans is the duration when they are active. It is common for short term loans to stretch across 3 months up to a year, where interest continues to build. This is perhaps one of the main differences between the two types of loan. Short term loans are not quite as short term as the name suggests. In fact, a short-term loan could last anything up to a year before it is due.

Another variation between the two is the amount that you can borrow. If you are borrowing a short term loan, you could be taking out up to fifty thousand. Maybe more if you are using it for a specific purpose such as buying property. On a payday loan, you might borrow a couple of thousand. However, most payday loans are for amounts a lot lower than this, usually under one grand. This is so they are ‘easier’ to pay back. Of course, this is not always the case. Recently, there have been proposals on an official cap on how much borrowers can take out for a payday loan. The proposed limit has been suggested as five hundred dollars. On short term loans, there have been proposals for restrictions on how much can be borrowed. But the amounts are far greater, ranging between twenty and thirty thousand.

Ease of Access: There’s another difference between short term and payday finance. Short term loans are greater amounts and therefore, more difficult to obtain. If you want to borrow a short-term loan, you will probably find yourself jumping through more hoops than a payday loan. Due to payday loans being smaller, they are often easier and quicker to gain access. If you want a payday loan, you may only need to spend five minutes filling out a form online. After that, the money might be immediately transferred to your bank account.

If you need to borrow money to finance an emergency expense we recommend that you always compare short term loans first, to make sure that you are getting the best offer.

If there are any fundamental differences, these are the main ones we should be focusing on. As you can see, payday loans and short term loans are quite similar. The difference is the amount that you want to borrow, the terms and the duration. You could think of a payday loan as a smaller short term loan. However, it’s true to say that the public often see the two completely differently.

For instance, many associate the term, “payday loan” with negative connotations. Often they think that someone designed payday loans to push people into debt. As well as this, they think that payday loans can be scams and cost people fortunes. Some people see payday loans companies as targeting those who cannot afford to borrow at all. While all this is true, these factors are not exclusive to payday loan companies.

The Dangers of Short Term Loans

Short term lenders can be just as dangerous. They too, may charge high levels of interest on their loans. They may also try and target people who have no choice but to borrow. Short term lenders may try to appeal to those with bad credit. Due to having bad credit, these individuals have limited options when looking for a place to borrow money online. That means they will agree to conditions that are unfair and financially dangerous. Looking at short term lenders in this way, there is no real difference between the two.

In fact, many payday loans lenders have tried to avoid the term “payday loan” altogether. Instead, loans with the terms and conditions associated with payday loans are now referred to as short term. It should be noted that these loans often have the same deadlines as payday loans with high rates of interest. They are simply advertised under a more acceptable name. I

Despite the negative ideas associated with payday loans, people still prefer these deals over longer loans. Why is this? One reason has got to be the ease of access. If you borrow a payday loan, you will have access to the money in minutes. If you borrow a short-term loan, it can take weeks or even months to be accepted. Short term lenders tend to run more extensive credit checks as well. But that’s certainly not the only reason. It’s clear that there is a difference between what these loans are used for. People often use emergency loans when the money situation is desperate. The borrower needs the money fast to pay bills or even an established debt. They can’t wait around to gain approval.

Furthermore, borrowers often see longer durations of borrowing as bad news. They think that if they are borrowing money for longer, they will pay more interest. They fail to understand that short term loans are more secure than payday loans. Therefore the companies can afford to charge less interest. In fact, it’s likely that a borrower would end up owing more on a payday loan than a short term loan. Thus, Cashfloat advises that despite the similarities, there are differences in both the perception and the conditions of these loans. Click here to read more about instant loans.

Sarah Connelly
Sarah is an enthusiastic writer, blogger and an eager agent of change. After completing her degree in Computer Science in one of London’s esteemed universities, Sarah’s early career in programming left her creatively frustrated. Looked for a way to combine her creative and analytical side, Sarah’s search led her to Digital Marketing and now she writes content and code for Cashfloat. Sarah enjoys spreading awareness about common financial issues and the importance of money management. With her STEM background, Sarah believes strongly in ethical business management and consumer protection. in her free time, Sarah enjoys reading, watching movies and eating out. After all, #YOLO!
Related posts
Technology & Innovation
Are Subprime Credit Cards Worse Than Payday Loans?
Technology & Innovation
How Do Vanquis Credit Cards Work?
Loans and Lenders
Why is Access to Consumer Credit Under Threat?