The Benefit Cap – All You Need To Know 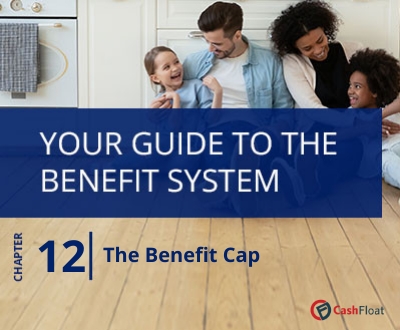 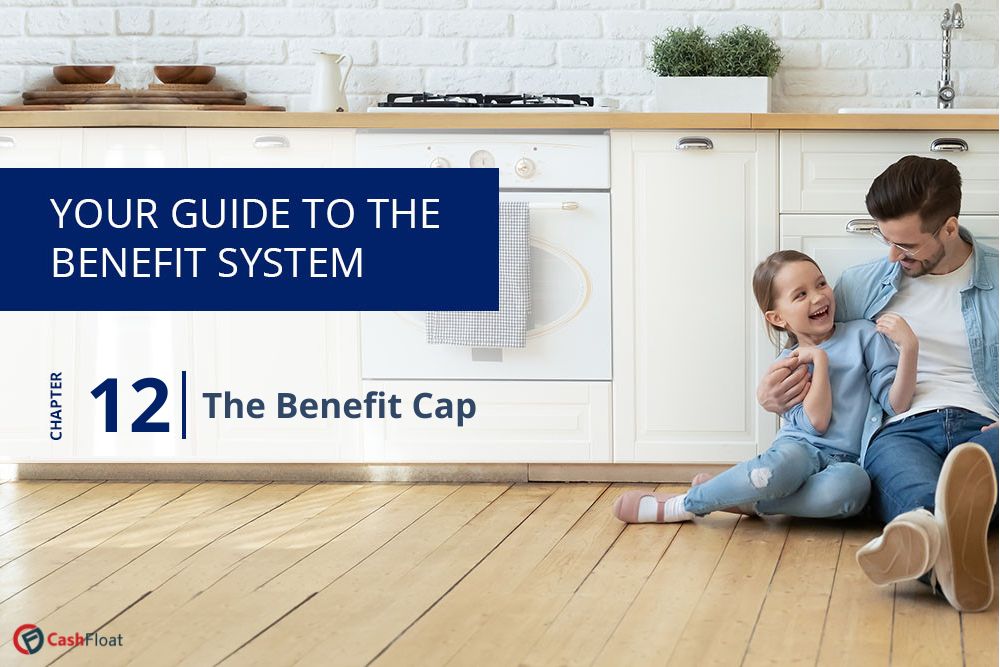 The introduction of the benefit cap in 2013, brought about a significant change in welfare provision in the UK. We will explain what the cap means for people who need the assistance of the state and we will also consider how well it has fulfilled its aim of getting claimants off welfare and into the workplace.

The Welfare Reform Act of 2012 initially introduced the benefit cap, and the cap level was further tightened by the Welfare Reform & Work Act of 2016. The cap is a limit on the total amount of benefits that someone of working age can receive. If a person is entitled to benefits that would add up to more than the limit, they will not receive more than the cap amount. As a result, the total amount of benefits that some people can claim has decreased.

Initially, the government intended to make savings on welfare spending of £275-£330 million per year by encouraging claimants to find work instead of relying on benefits. 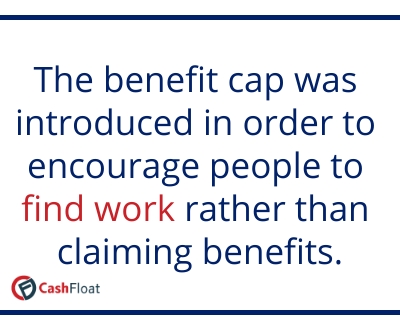 How the Benefit Cap Works

The cap works by limiting the total amount that a person can receive in benefits. Every benefit claimant of working age cannot claim more than the cap amount for any benefits which are included in the cap, unless they are exempt.


The rates shown above are the current cap rates, as set in 2016. Before that, the cap rates were higher.

Here’s what you need to know about the benefit cap:

Benefits That are Affected

Claimants will have the cap applied to their combined income from the following:

If the total amount that the person is eligible for of these benefits is more than the cap, then the full amount they receive is limited to the cap level. If they claim other benefits, which are not affected by the cap, they will receive this on top of the cap amount. Some people are exempt from the cap and will not be affected by it at all. Additionally, many people who begin a claim for Universal Credit will not be affected for up to 9 months. Read on to find out more.

Below are exemptions for those under the state pension age:

Individual claimants are exempt if either they, their partner or any children under 18, who live with them, get:

New claimants for Universal Credit can get a 9 month grace period, during which the benefit cap does not apply to them. You would be entitled to this grace period if you began claiming Universal Credit because you stopped working or if you are now earning less than £617 per month. Also, in each of the 12 months leading up to your claim, you must have made at least £617 per month.

The Effects of The Benefit Cap

The idea of the benefit cap was to discourage welfare dependency and give claimants an incentive to get a job. It was initially claimed that 30,000 claimants had moved into employment within the first year of it being introduced. However, a closer examination of the figures showed that although there had been a reduction in people affected by the cap, some had just avoided the cap by claiming Working Tax Credit which made it appear as though people had left the benefits system. In addition, others had moved to other benefits which were not affected by the cap.

According to the Institute for Fiscal Studies analysis, only 5% of those affected had consequently moved into work and/or moved into cheaper accommodation. The vast majority had done nothing but tried to cope with the loss of income and some people had to use short term loans to get by. Welfare organisations and charities commented that the reform caused debt, rent arrears and people to turn to food banks to handle the shortfall in income. 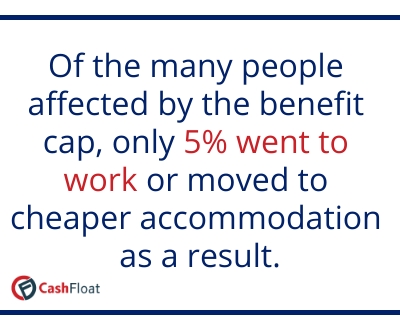 The 2016 changes to the benefit cap received a lot of criticism. With the cap being tightened even further, it was found that single parents and children in families who relied on benefits were particularly hard hit. Statistics released by the Department for Work and Pensions showed that for every child whose parents had moved back into work, 8 others were living in worse conditions. It has been noted that single mothers are particularly disadvantaged. While some parents in couples may be able to return to work, single mothers (or fathers) are rarely able to and are penalised unfairly.

When the benefit cap was first introduced, it had more of an effect on people living in London. Between 2013-2016, over half of the people who had their payments cut because of the cap lived in London. Many of the people who were receiving benefits in London and who were affected by the cap were receiving higher rates to cover their accommodation costs. The average price of renting a property in London is 61% higher than the national average.

After the amendment to the cap levels in 2016, it now affects more people overall, and the effects are being felt more keenly outside London. Figures released by the Department for Work and Pensions in 2018 showed that over 85% of people who had had their payments cut were single mothers.

While the benefit cap may have initially forced a minimal number of people to return to work, who were able to, it has also unfairly penalised people who need the support of the state. Single parents who are unable to work and have no other place to turn, and people who live in London are particularly disadvantaged. 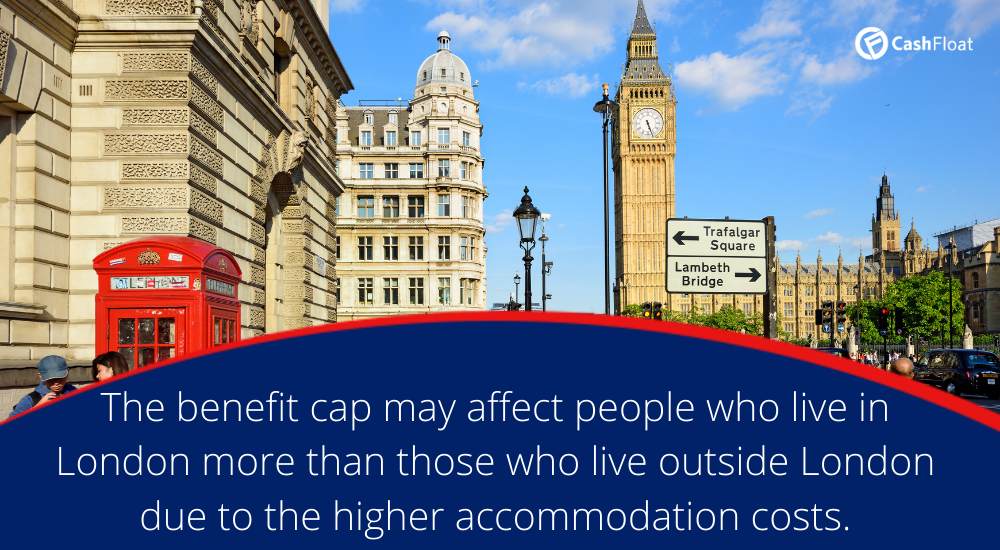 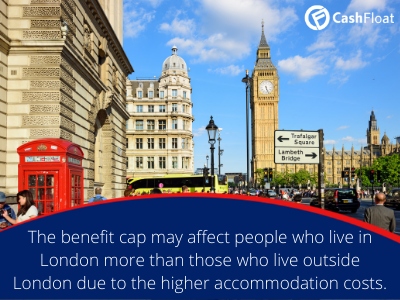 What You Can Do if Affected by The Cap

If the cap has cut your benefits and you find that you are struggling to get by, you may find extra support. In particular, if you are struggling to pay your rent, you may be able to claim Discretionary Housing Payment. You can also contact the Universal Credit helpline on 0800 328 5644 and see if any other support is available.

If there is no other help available to you, consider applying for an online loan to tide you over until you have found a way to supplement your income. However, loans can be expensive if not repaid in time, so make sure you have a plan for making your repayments.


FAQs about The Benefit Cap

Which benefits are not affected by the cap?

How many claimants moved into cheaper accommodation because of the cap?

According to the Department for Work and Pensions, in 2014, 1 in 20 claimants downsized their property due to the changes to welfare provision introduced by the Welfare Reform Act 2012. This included the introduction of Universal Credit, the removal of the spare room subsidy, as well as the benefit cap.

How popular is the benefit cap among the public?

In a survey conducted by the DWP in 2013, 73% of people polled supported the idea of a benefit limit if it meant claimants would work more hours or find jobs. However, since then, there has been growing concern. Few people know the reality of living on benefits, and people have brought attention to the reality of life for people affected by the cap, which has raised concern about the effect that it is having.

What is the welfare cap?