March 17, 2019 - by Sarah Connelly
The History Of The Leading UK Banks – Chapter Five 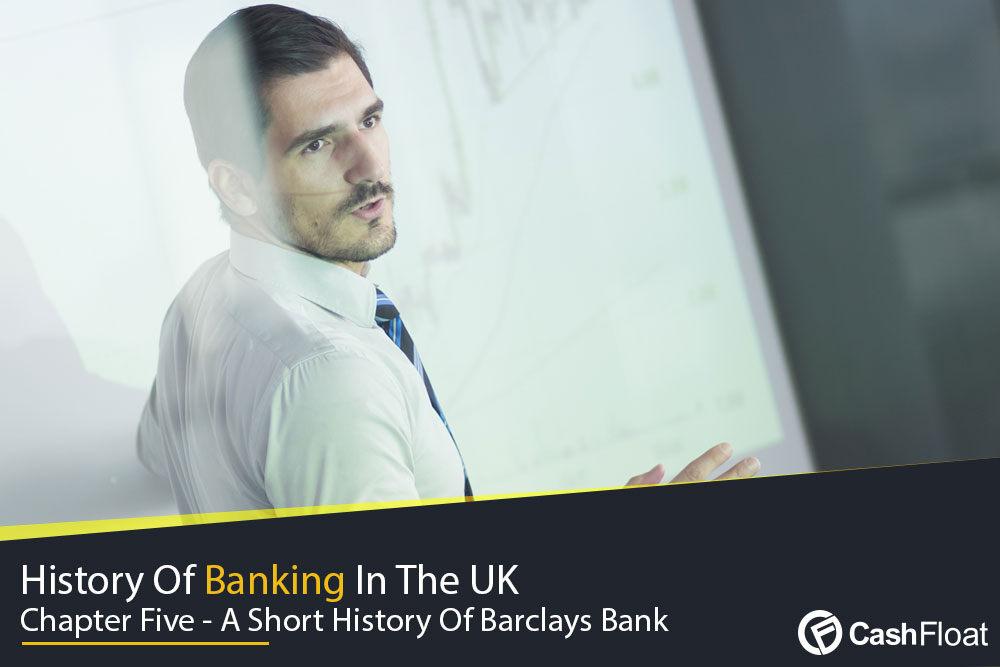 Cashfloat is a payday loan direct lender that operates from London to provide consumers with short term credit in their time of need. As a part of the financial sect, we take great interest in discovering the UK financial market and sharing the information we learn. In this article, we will look at a short history of Barclays Bank.

The Earliest Days Of Barclays Bank

Barclays Bank is one of the oldest banks in the UK. It was founded in 1690 and is now one of the big four banks that have the largest market share of UK customers. The roots of the bank began with two Quakers*, John Freame and Thomas Gould, who were goldsmiths in the city of London. At that time goldsmiths acted as bankers giving out loans to businesses and merchants.

Like many other businesses which were formed in that era, partners in the bank were usually selected through arranged marriages that would be beneficial to the company. When John Freame’s daughter married John Barclay in 1728, he joined the bank and added his name to the title and this eventually became the sole name of the bank.

Amalgamation Of Businesses That Formed Barclays

Joining several other banks on Lombard Street in London, Barclays remained on this prestigious street until 2005 when it relocated to Canary Wharf. At the end of the 19th century, Barclays, as it had become known, had amalgamated with several smaller banks under the name of Barclay and Company Limited.

At this time it was the sixth largest bank in England. In 1902 it was floated on the stock exchange and by 1917 had changed the name to Barclays Bank Limited. By 1920 the Treasury had barred further mergers between banks but this did not stop Barclays from expanding and it began to take its business to other parts of the world. Notably, the Caribbean, South Africa and many parts of Europe.

The history of the eagle emblem of Barclays is quite fascinating. When the bank was beginning to grow in the late 18th century, few people could read and write and so many businesses used signs to advertise what their business was. It was decided that the bible emblem that was already installed at 54 Lombard Street would not be appropriate for Quakers to use, so they chose a sign of the Black Spread Eagle.

When the bank was permitted a grant of arms in the 1930s, they wanted to keep their distinctive emblem. However, because it was used on many other royal coats of arms it had to be changed. Barclays chose to add three crowns to the emblem, because two of their other offices at Lombard Street were numbered 43 and 55, and they had signs that were for the three kings and the three crowns. The emblem remains one of the most distinctive signs that people always associate with Barclays.

The Rise Of Domestic Banking In The UK

During the two world wars there was an increase in the number of women who worked in banks. This increased during the 1950s when Barclays employed more women than men, an unusual but very welcome state of affairs for that era.

The improved services of the bank also saw more competition from rivals in the UK and Barclays embarked on large scale advertising for the first time. In 1968, the bank acquired Martins Bank, a regional smaller business and in the years that followed other businesses were added as Barclays Bank continued to grow. The Woolwich Building Society which had converted to a PLC in 1997 was bought by Barclays in 2000.

Changes To The Organisation Of Barclays Bank

Originally, after the first amalgamations, Barclays relied upon local head offices which were related to the banks that they had taken over. In the 1980s these were replaced by regional offices and following that a change to more centralised headquarters with call centre staff taking calls and queries that used to be put through to branch staff.

The debit card, which we take for granted today, was a first for Barclays. The bank launched the Barclays Connect Card in the 1980s and this followed on from the first credit card which was launched in the 1960s and was called Barclaycard.

In 1967, Barclays was the first bank to introduce a cash machine known as an ATM (Automated Teller Machine). This was before the first plastic cards and it issued a maximum of £10 cash delivered when you inserted a printed paper that had been obtained from a cashier.

By the 1970s the ATMs accepted cash cards and could not only dispense money but could also be used for checking balances and to deposit money. And, in 1986, the ATMs were linked to other banks so you did not need to go to a specific Barclays machine. By 1977 Barclays had introduced the first company cards which had previously only been produced for individuals.

In 1999, Barclays launched online banking and by 2008 it had introduced the first contactless payment system using debit and credit cards. Then, 2012 saw the launch of mobile banking when for the first time smartphones and tablets could be used to make transfers and pay bills.

The latest innovation from Barclays is the Barclaycard Anywhere system for shops. It is a system that works by connecting a portable chip and pin to a tablet or smart phone. This means that payments can be taken anywhere as long as you have an Internet or Wi-Fi signal. Useful for any business that is mobile like taxis and coaches, this new system has made it easier for payments to be taken anywhere at any time.

In the mid 1980s, following deregulation of the banking system, the bank launched its own investment banking and this grew and expanded until it became Barclays Capital. Eventually, Barclays acquired Lehman Brothers which failed when the financial crisis took hold in 2008. However, that belongs to another part of the story.

Barclays Bank is one of the largest providers of financial services in the UK and the rest of the world. It employs over 140,000 people and continues to offer retail and investment banking services. In 2014, Barclays had 18% of the share of current accounts in the UK, second only to Lloyds Banking Group.

Barclays Bank has remained close to the hearts of the public and until relatively recently had retained a reputation for reliability and trustworthiness. Recent events have taken over and the bank has just received a serious fine from the FCA for failing to lower the risk of financial crime.

This followed a substantial fine in May 2015 that was issued for libor rigging (rigging the interest rates that banks charge each other). Even as far back as 2011, the bank was fined for mis-selling high end investments to retired people without fully explaining the risks. However, it is fair to say that it was not alone in this practice and the other other major banks were just as culpable.

Despite all of this negative publicity, Barclays is still one of the leading banks in the UK and only time will tell whether or not this remains true in the future. Later articles will more closely examine the incidence of FCA fines and what the future holds for Barclays.

* Quakers believe in a direct relationship with God. They believe that living a life through Jesus Christ and in the present daily life is more important than attending a ritual church service held by a priest. They hold meetings and have silent worship.

To read about Barclays fine – Penalty of the century? Click here.

Sarah Connelly
Sarah is an enthusiastic writer, blogger and an eager agent of change. After completing her degree in Computer Science in one of London’s esteemed universities, Sarah’s early career in programming left her creatively frustrated. Looked for a way to combine her creative and analytical side, Sarah’s search led her to Digital Marketing and now she writes content and code for Cashfloat. Sarah enjoys spreading awareness about common financial issues and the importance of money management. With her STEM background, Sarah believes strongly in ethical business management and consumer protection. in her free time, Sarah enjoys reading, watching movies and eating out. After all, #YOLO!
Related posts
Technology & Innovation
What is Open Banking? The Future of Banking Explained
FCA Compliance
Money Laundering and Bank De Risking in the Financial Sector
Loans and Lenders
Payday Loans and Bank Loans: The difference