A Short History Of The Royal Bank Of Scotland

December 31, 2018 - by Sarah Connelly
The History Of The Leading UK Banks – Chapter Seven 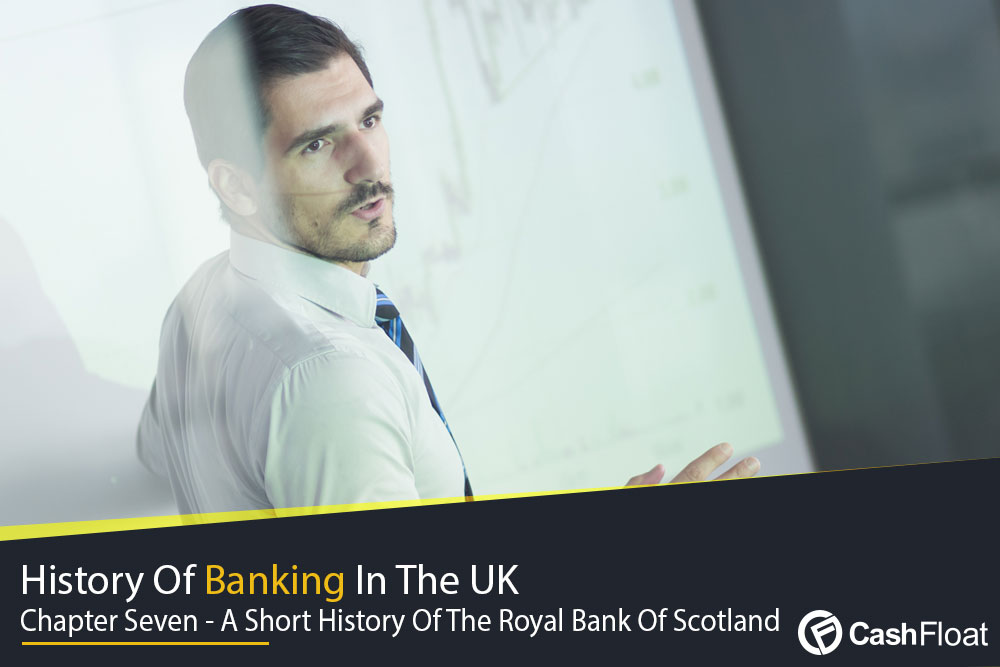 Western Circle Limited trades as Cashfloat.co.uk to provide short term loans in the UK to consumers needing quick cash before payday. Even though we are part of a relatively new financial industry, there is no denying that UK banks affect the entire economy massively. This guide aims to discover how banking in the UK has evolved to become what it is today and how this affects us. This article will talk about the Royal Bank of Scotland and its history.

The Royal Bank Of Scotland

The Start Of One Of The Big Four UK Banks

As one of the biggest providers of banking services in the UK, Royal Bank of Scotland has a long history. Founded in 1727, its name reflects the royal charter that was granted when it was formed. The establishment of RBS began when investors of the failed ‘Company of Scotland’ formed the Equivalent Society which wanted to go into the banking industry. The British government of the time was happy to agree as it saw the Old Bank Of Scotland as a sympathiser of the Jacobites.

As early as 1728, the RBS invented the concept of an overdraft when it allowed a merchant of the day to access £1,000 worth of credit. This was huge amount of money at the time but this ruling paved the way to the modern overdraft that so many of us rely on today. The first branch of the RBS was opened in Glasgow and further branches in Rothesay, Dalkeith, Greenock and Dundee were part of the its first forays into expansion.

Rivalry With The Old Bank Of Scotland

The Bank of Scotland (now part of HBOS) and the RBS had great rivalry and this was centred on the issuing of banknotes. RBS wanted to either drive BOS out of business or take it over. One of the methods that RBS embarked upon was to acquire a large number of the opposition’s bank notes and then present them for repayment which then forced the BOS to call in payment for loans.

In 1728 the BOS had to suspend payments on its notes which caused damage to its reputation. However, this tactic by the RBS could have backfired as soon as it started to issue more of its own banknotes leaving it open to the same method of attack. Eventually a truce was declared but for a long time each of the banks refused to pay out on the others banknotes. No merger ever took place and the two institutions stayed separate and remain so today.

Expansion Of The RBS

In 1820, the RBS moved offices from its original branch to the new town area of Glasgow. During the remaining part of the 19th century it continued to acquire other banks until by 1910 it had 158 branches.

The RBS moved into London in 1874 when it opened a branch office and this was the start of a presence in England. Although, unlike the Scots, who were unlikely to use an English bank when there was a Scottish one, the English took to the RBS. However, the government passed legislation that prevented further expansion and it was agreed that any Scottish banks making incursions into England would restrict their activities to London.

After World War One, the RBS managed to acquire some smaller English banks including Williams Deacons Bank and Drummonds Bank.

Competition In The Nineteenth Century

At the start of the nineteenth century, the RBS and BOS faced some competition in the form of the Commercial Bank of Scotland. As the ordinary people only had access to banks which depended upon the RBS and BOS, this was seen as unsatisfactory and thus the Commercial Bank of Scotland was formed. This was advertised as the ‘Bank of the Citizens’. The new bank enjoyed some success but the RBS continued to go from strength to strength. The RBS put up money for the first steam powered railway in Scotland and this was just one of many prestigious projects that the bank financed.

During the twentieth century, the RBS pursued an aggressive expansion model and with the takeover of Williams Deacons, Glyn Mills & Co and Drummonds it grew even bigger. The latter two along with RBS became known as the Three Banks Group.

In line with other banks, the group took to new technology to improve its services adding typewriters, telephones, adding machines and teleprinters to its organisation so that full advantage could be taken of the latest technology in banking.

When world war two was over, the RBS opened its own college which trained new employees to use the new machines and to learn all about how the financial world operated.

As English banks continued to consolidate and become bigger, the RBS had to go down the same route. The National Commercial Bank eventually merged with RBS and with the strength that came from amalgamation the large bank took advantage of two events that formed the basis of financial changes in Scotland the 1970s.

By 1971, the restrictions on Scottish Banks operating in England were lifted and this, together with the financial boom created by North Sea oil, greatly improved the Scottish economy and allowed RBS to expand into foreign interests. The bank opened offices in America and Hong Kong and by the end of the 1970s was known as the Royal Bank Of Scotland Group plc.

The Innovations Of The Royal Bank Of Scotland

One of the great innovative moves of RBS was to start up the first telephone insurance business. This was Direct Line and at the beginning it offered car insurance at much lower rates than its competitors. Starting with just 63 employees, Direct Line now has some 10,000 people who work for the business throughout the UK.

In the 1990s, RBS bought out a private bank, Adam and Company and this allowed it to launch a direct banking arm of the business in 1994. This became the fastest growing banking by phone operation and by 1997, RBS was offering online banking. In a collaboration with both Virgin and Tesco, RBS also began to offer a wider range of financial services such as insurance.

The Twenty First Century And RBS

The biggest takeover of the bank’s history took place in 2000 when RBS took over National Westminster Bank plc which hitherto had been one of the big five banks. These were now reduced to the big four and remained so until HBOS jumped in later in the decade. Natwest still retained its name, brand and branches.

Known as a bank that took care of its employees, RBS opened a new headquarters in Edinburgh in 2005. It was a state of the art complex with a creche for employee’s children and fitness facilities. Just before the financial problems of 2007, RBS acquired a Dutch bank, ABN Amro, although some critics who were later proved to be correct, thought that this was a step too far in acquisitions.

The Financial Crisis And RBS

In April 2008, at the heart of the financial crisis, Fred Goodwin, the chief executive of the bank was forced into a position where, in order to raise cash, a rights issue took place. This was the largest rights issue ever seen in the world of UK banking and was aimed at raising £12 billion. Another £5.9 billion was written off after RBS revealed that it was heavily exposed to the credit markets.

As Fred Goodwin stepped down the government pumped in £20 billion as a bail out and this gave it a 70% share of the bank. Following this period of uncertainty, the bank began to shed jobs from its global banking and its back office staff.

One of the largest controversies that surrounded RBS was in the matter of executives bonuses. Despite declaring a loss of over £1.1 billion in 2010, bonuses of £1 billion were still paid out to failing executives. Bonuses are now restricted to shares in the company

The bank was also accused of hypocrisy when it financed fossil fuel companies which are now seen as outdated and bad for the planet. Many protests took place outside branches in high streets all over the UK.

A more recent controversy took place when the RBS stated that if Scotland voted for independence in the referendum, it would move its headquarters to London.

In 2011, RBS along with Barclays received a hefty fine from the FSA for anti competitive practices. One of these was the fact that customers with basic bank accounts were not allowed to use their bank cards at ATMs that belonged to other banks. During 2012, RBS had a major computer malfunction that prevented customers from accessing funds.

What Is The Future For RBS

Like Lloyds Banking Group, the RBS is forecast to make cuts in order to improve its situation, This will almost certainly mean more job losses and branch closures. Branch transactions are down and more customers now use online and telephone banking. RBS is due to declare its eighth consecutive loss in a row. In line with the other big four banks in the UK, RBS has suffered from being too big to fail and the government still owns 73% of the bank.

Sarah Connelly
Sarah is an enthusiastic writer, blogger and an eager agent of change. After completing her degree in Computer Science in one of London’s esteemed universities, Sarah’s early career in programming left her creatively frustrated. Looked for a way to combine her creative and analytical side, Sarah’s search led her to Digital Marketing and now she writes content and code for Cashfloat. Sarah enjoys spreading awareness about common financial issues and the importance of money management. With her STEM background, Sarah believes strongly in ethical business management and consumer protection. in her free time, Sarah enjoys reading, watching movies and eating out. After all, #YOLO!
Related posts
FCA Compliance
RBS fined £390m for ‘widespread misconduct’ in LIBOR-rigging scandal (Feb 2013)
FCA Compliance
RBS and NatWest fined £2.8m for poor customer complaint handling (Jan 2011)