December 26, 2021 - by Sarah Connelly
The History of the Leading UK Banks – Chapter Six

How did Lloyds start from button making and iron producing and go onto become one of the big four banks in the UK? Read the history to find out the fascinating story of Lloyds banking rags to riches. 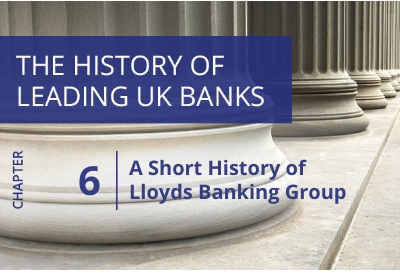 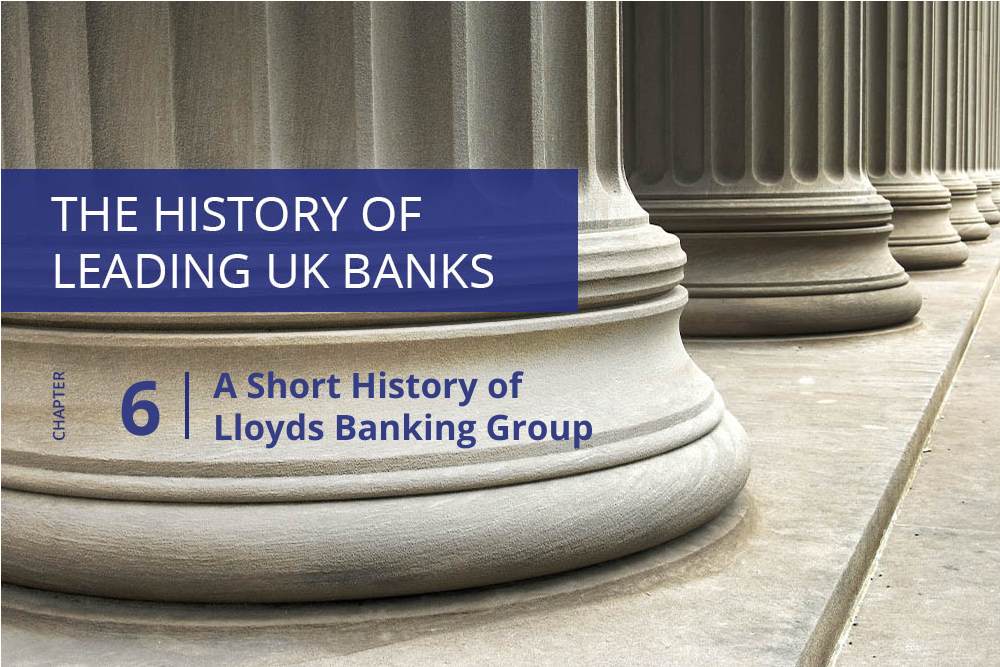 Cashfloat is a London based short term loan provider. This guide to the leading banks of the UK attempts to help us understand how the UK economy has been affected by the history of its banking. In this article, we will look at a short history of Lloyds Banking Group.

Lloyds Bank was founded in 1765 in the city of Birmingham. It began when John Taylor, a button maker, and Sampson Lloyd, an iron producer joined forces. They started a bank called Taylors and Lloyds. Based in the centre of the town, the bank served manufacturers and merchants.

From a single office, the bank operated for over 100 years. It was during the period when Birmingham was becoming a powerhouse of the Industrial Revolution. In 1852, the Taylors dropped out of the business. The bank became Lloyds & Company, and in 1865 it became a ‘limited’ concern.

The need for more capital saw Lloyds expand and a board of directors appointed. Some were prominent citizens. It included Joseph Chamberlain who was later to become the Mayor of Birmingham. During the next 50 years, Lloyds expanded and took over 200 smaller enterprises. By the 1880s the bank decided to make a foray into London, the hub of banking.

Joining Barclays Bank, Lloyds settled in Lombard Street when it took over Barnetts, Hoares and Co. The bank first used the famous Black Horse symbol at this time. The symbol was previously used by the bank that was taken over. Another, important company included in the Lloyds takeover push was Twinings Bank. In 1893, Lloyds took over Herries, Farquhar & Co. It was a business that had introduced the concept of the traveller’s cheque.

The Twentieth Century And Beyond

Lloyds continued to expand in the twentieth century. It expanded both in the UK, and it slowly began to make inroads into the overseas markets. Like other banks, Lloyds started to employ more women staff during the period of the first world war. Additionally, there was a gradual change over to mechanisation. This was instead of all the accounting completed in handwritten ledgers.

One of the largest takeovers that Lloyds embarked upon was in 1918 when it took over the Capital and Counties Bank. This move meant that Lloyds had an extra 473 branches giving it a more than 50% increase in branches. At this point, it became part of the ‘big five’ banks of the UK.

Starting out in Paris and Le Havre, in 1911 Lloyds began its foray into the foreign markets. Its overseas operations later became known as Lloyds Bank Europe. Lloyds also established branches in Argentina, Brazil and South Africa. Lloyd saw these as emerging countries with excellent opportunities due to the wealth of minerals people mined and extracted.

Starting in the 1920s, the mechanisation and technological systems at Lloyds using machines like Comptometers and eventually punch hole machines was eventually finished in the early 1960s. Lloyds installed the very first computer in 1963. By 1972, Lloyds opened its first cashpoint machine (ATM).

The Trustee Savings Bank started in 1810 and operated as a local savings bank for ordinary people. It was only open one day a week and then only for one hour. Customers could not allowed to deposit more than £20 per year. This bank like many other early savings banks was designed for the working classes. Its founder’s aim was to encourage ‘the lower classes’ to engage in good habits. This, in turn, would lead to them being industrious and sober.

Started in Scotland by a clergyman, the Trustee and other savings banks quickly spread to England. The expansion was stopped, however, by the passing of the Post Office Savings Bank Act in 1861. More than 2,500 PO Savings Banks opened within a year of the act.

Following a serious fraud that occurred in Cardiff in 1886, all the local savings banks came under the umbrella of an establishment. It became known as the Trustee Savings Bank Association. This expanded during the two world wars. It then followed mergers and acquisitions. By the time 1970’s came, there were 73 savings banks. After floatation in 1986, the Trustee Savings Bank formally became the TSB Group plc. 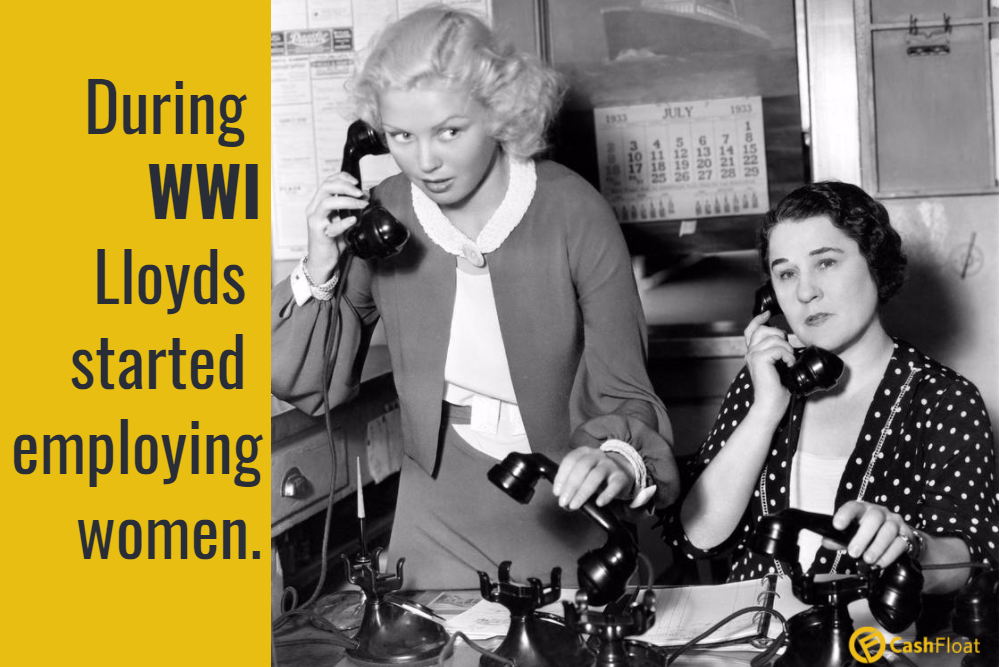 The Merger Of Lloyds Banking Group And The TSB

In 1995, Lloyds Bank and the TSB merged to become the Lloyds TSB Group. At this same time, Lloyds bought out the Cheltenham and Gloucester Building Society. The result of this was the demutualisation of the building society, and this takeover became the first collaboration between a bank and a building society. Lloyds TSB was now one of the ‘big four’ banks in the UK.

During the early part of the twenty-first century, Lloyds TSB picked up many business awards for excellence. However, the catastrophic financial crisis that started during the years 2007/2008 had an enormous impact on all of the UK banks. Lloyds TSB was no exception.

The problems that had occurred at HBOS had led to a major fall in share price. This led to a situation where this bank was about to fail. Although it went against the rules of the monopolies commission, the government allowed Lloyds TSB to take over HBOS. This move made the bank the largest holder of mortgages in the UK.

Following this move and to prevent a failure of the UK banking system, the Treasury recapitalised some of the UK banks. Lloyds TSB was one of them leading to the government holding a 43.4% stake in Lloyds TSB.

Scandals And Controversies At Lloyds

Lloyds TSB has been involved in some controversies including a money laundering operation that resulted in it being fined £350 million dollars by the US government. There have also been accusations of tax avoidance and complaints to the Financial Ombudsman by customers. Compared to its nearest rival Barclays, there was more.

In 2013 Lloyds received a fine from the Financial Services Authority (now the Financial Conduct Authority, who also regulates the payday loans sect) for serious failings regarding staff bonuses. Lloyds told staff that they would have their pay cut or face demotion if they did not hit certain targets. Consequently, it led to some mis-selling of financial products. Lloyds Banking was also involved in the LIBOR rate fixing scandal that hit the headlines in 2014. They had to pay a fine of some £218 million.

In 2015, Lloyds was fined by the FCA for its failure to investigate and properly handle complaints regarding Personal Protection Insurance. However, it was not alone in this as other banks have received similar fines.

The Split Between Lloyds And The TSB

The Future For Lloyds Banking Group

In February 2016, it is clear that the mis-selling scandal that had hit Lloyds Banking Group is not yet over. Analysts are predicting that the bank will have to pay out more than £2 billion more. Although it has fought its way back to profitability, the extra compensation payments could yet see more problems for this old established bank.

Both Lloyds Banking Group and other UK banks are expected to embark upon another round of branch closures. The low-interest rates that officials are still examining in the UK, (that result in cheaper small loans,) may be a cause for even more cost cutting. Pressure from the government has meant that Lloyds does not close a branch if it is the last bank in a town. However, were it not for this pressure Lloyds would certainly be looking to save more on branch costs. 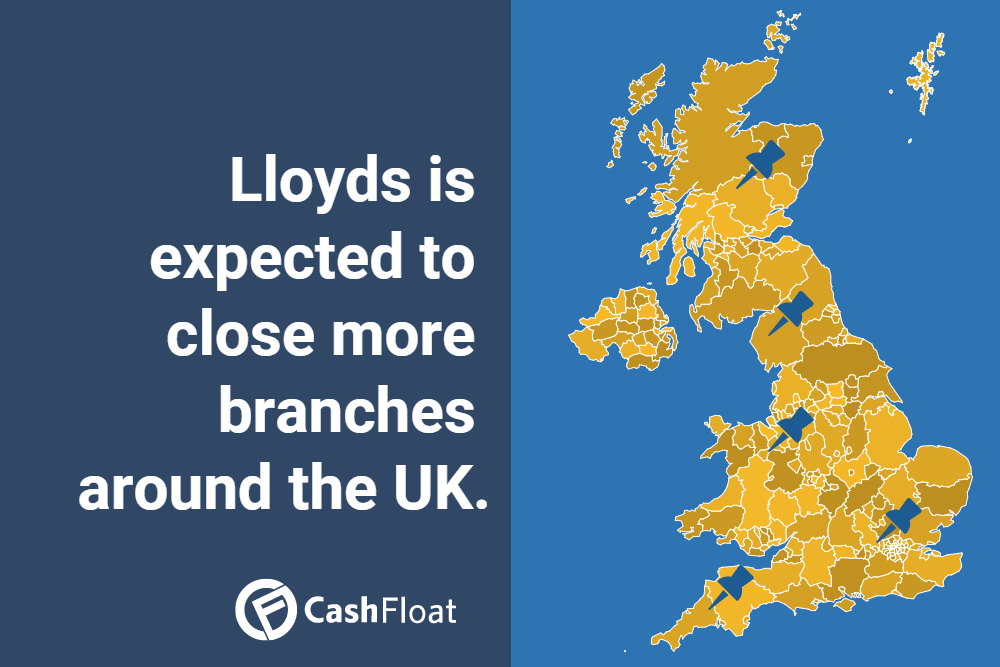 The government still holds a substantial stake in Lloyds Bank and Philip Hammond is loath to sell its shares at a loss. However, even though share prices are still low, this could happen shortly.

There has been a steady fall in dividends at Lloyds Banking Group and other UK banks. This giant of banking is not yet out of the woods. Until the settlement by the FCA concludes the further investigations, Lloyds will no doubt be under further scrutiny by the public. Even though the bank has passed stress tests, until the economic outlook of the UK improves, Lloyds Banking will continue to teeter on the edge of recovery.

In this chapter, CashFloat, offering cheap payday loans, presents you with the complete history of the establishment of LLoyds bank. From its humble beginnings to joining forces with other banks and societies and then going onto become one of the top four banks, Lloyds has a rich history. However, the Lloyds bank’s reputation has been tarnished in its recent history, forcing it to sell its shares, causing it to split with TSB and teetering on the edge of recovery.

Chapter 7:
A short history of RBS

Sarah Connelly
Sarah is an enthusiastic writer, blogger and an eager agent of change. After completing her degree in Computer Science in one of London’s esteemed universities, Sarah’s early career in programming left her creatively frustrated. Looked for a way to combine her creative and analytical side, Sarah’s search led her to Digital Marketing and now she writes content and code for Cashfloat. Sarah enjoys spreading awareness about common financial issues and the importance of money management. With her STEM background, Sarah believes strongly in ethical business management and consumer protection. in her free time, Sarah enjoys reading, watching movies and eating out. After all, #YOLO!
Related posts
Money & Borrowing
An Overview of the Four Leading UK Banks