An Overview of the Four Leading UK Banks

March 22, 2020 - by Sarah Connelly
The History Of The Leading UK Banks – Chapter Four 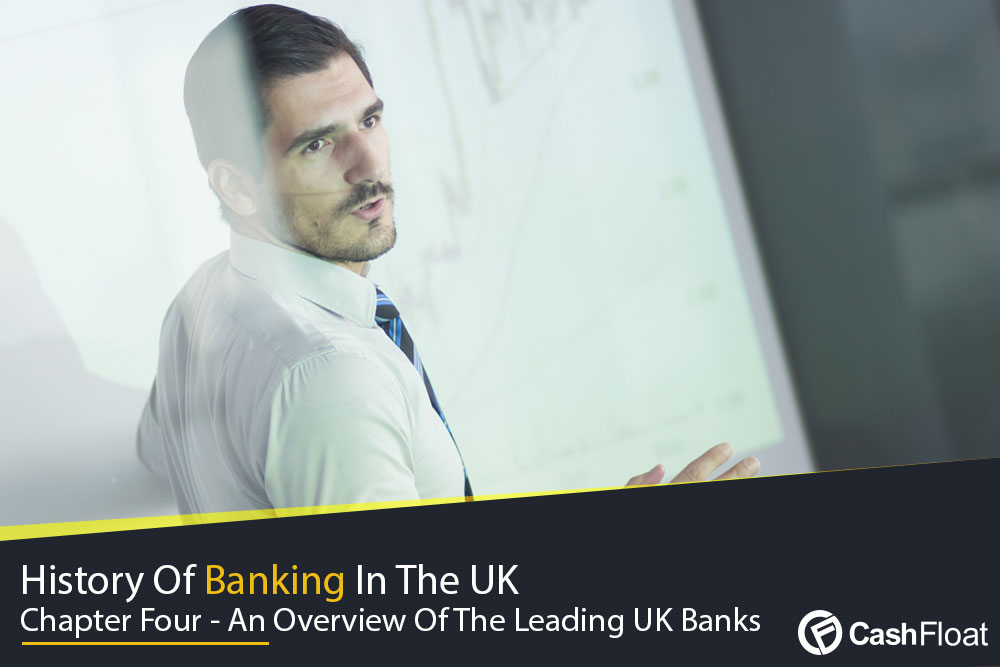 Cashfloat loans is a payday loan direct lender operating from the UK. As part of our aim to keep our customers well-informed, we have published this guide to the leading UK banks. In this article, we will look at who four leading UK banks and their history.

How Did The Big Four Leading UK Banks Develop?

The development of the four leading UK banks is an interesting subject and brings to mind many questions. How did these businesses become the leading banks? Is it to do with the longevity of the businesses or is it because of their good customer service and the products that they offer? Furthermore, is it a good thing that the public does not have much choice when it comes to banking in the UK?

The four leading banks in the UK are Barclays, HSBC, Lloyds Banking Group and the Royal Bank of Scotland. Barclays is one of the oldest established banks and it was started in 1690. Lloyds began in 1765 and the Royal Bank of Scotland was founded in 1727. The newcomer is HSBC which was not established until 1865. However, as you can see these are all banks that have been trading for hundreds of years. So, it is not surprising that they are still around. However, why these banks and why not Coutts or C Hoare & Co? And, why do the public have an allegiance to one bank that appears to remain most of their lives?

Barclays Bank In The UK

Barclays is a household name and it was started by the Quakers. Its roots lie in London but it was one of the first banks to spread out to the working class areas in the North East of the UK. The business was at the forefront of banking and introduced the first credit card (Barclaycard) to the UK so it is little wonder that this multi national company has remained so popular.

In spite of recent problems when the bank was fined for mis-selling products, Barclays retains the loyalty of many of its customers.

Lloyds is another old bank that still holds great sway in the UK. Once joined with the Trustee Savings Bank, it has a high profile as a customer friendly bank and it was the first bank to offer special student and then graduate accounts. So, many who graduated and then started out on a career still regard Lloyds as their bank of first choice.

Lloyds has also had many problems particularly after the financial crisis when it was forced to take on HBOS but it still remains a very popular choice for the UK public.

The Royal Bank Of Scotland began with customers who lived in Scotland but it spread out to the whole of the UK and after taking over some of the smaller Scottish banks it joined the ranks as a dominant bank in the UK.

English banks tried to expand into Scotland but this incursion was very small. However, the RBS went from strength to strength and expanded into England and Wales taking a substantial share of the market which today stands at 18%.

Although HSBC has been around for many years it was not until the year 2000 that it expanded into Continental Europe. The bank currently has around 12% of the market share but has consistently beaten the other banks for good customer service. The First Direct branch of the bank is a purely telephone banking service and this sector has won numerous awards for excellent service and products.

Reasons Why These Four Dominate

There are number of factors why the big four dominate the banking sector in the UK. One is the longevity of the companies and another is that older banks that are based in London, such as Coutts, only offer their services to the aristocracy and the very rich.

The big four have been around and in the consciousness of the ordinary people of the UK and once someone has joined a bank it is difficult to get them to switch to another.

Switching To Another Bank

Apparently the customers of banks are so reluctant to move their accounts that they remain more faithful to their bank than their partners. Research has shown that a customer will stay with a bank for an average of 17 years and this is due to a variety of reasons.

Many people choose their bank under the influence of their parents and three out of five people who were interviewed stated that this was the prime reason behind their choice of a particular bank. Another reason why people choose to stay with a bank, even if they are dissatisfied with the service, is the many stories that have been in the press about the difficulty of changing direct debits and standing orders. If a crucial payment for the mortgage or rent is at stake many people will just stay put.

In spite of the seven day switching option that was put into place two years ago most people are reluctant to change banks.

The Domination Of The Big Four

Some new banking services have complained that the dominance of the big four banks has led to what amounts to a stranglehold on the banking sector in the UK. Challenger banks like Tesco and Virgin Money have asked the Watchdog For Competition to create a more level playing field in the banking industry.

They have maintained that the budget for marketing by just one of the big banks is more than the profits made annually by a challenger bank. So, despite the government promise of creating a more competitive market, the smaller newcomers are not getting a large share of business. In fact, the big four take up 77% of current accounts in the UK.

Despite the continued worries about large banks that are too big to fail, there has been little to help the new banks get a larger share of the market. One of the hurdles faced by new banks, is the need to set aside the capital to cover risk. This means that for every mortgage that is provided the smaller banks needs to set aside ten times more capital to cover their risk than a large bank would need to do.

Will The Four Leading UK Banks Ever Be Broken Up?

In spite of the warning from the FCA that big banks mean a greater risk of failure, there has been very little done to break up the dominance of the big four banks. The Competition and Markets Authority has dismissed worries about the dominance of the big banks and states that customers are unlikely to change banks even if they are offered a better deal with a smaller business.

So, the dominance of the big four banks looks set to continue for some years. It would appear that in spite of better products and good customer service, most people loathe to make changes to their banking arrangements. There are obviously good reasons for this state of mind. Financial matters can be worrying and sticking with what you know may sometimes appear to be the best option.

These are just a few factors about the dominance of the four leading UK banks. In later articles, we will look in greater depth at the history of these banks that have become so important to the general public and the economic state of the country.

Sarah Connelly
Sarah is an enthusiastic writer, blogger and an eager agent of change. After completing her degree in Computer Science in one of London’s esteemed universities, Sarah’s early career in programming left her creatively frustrated. Looked for a way to combine her creative and analytical side, Sarah’s search led her to Digital Marketing and now she writes content and code for Cashfloat. Sarah enjoys spreading awareness about common financial issues and the importance of money management. With her STEM background, Sarah believes strongly in ethical business management and consumer protection. in her free time, Sarah enjoys reading, watching movies and eating out. After all, #YOLO!
Related posts
Technology & Innovation
Barclaycard: The UK’s First Credit Card
Money & Borrowing
UK Bank Services and Rates
Money & Borrowing
Barclays Fine – Penalty of the Century?