Is the UK the Best Welfare Country in the World?

A Guide to the Welfare System in the UK – Chapter 2, Part II 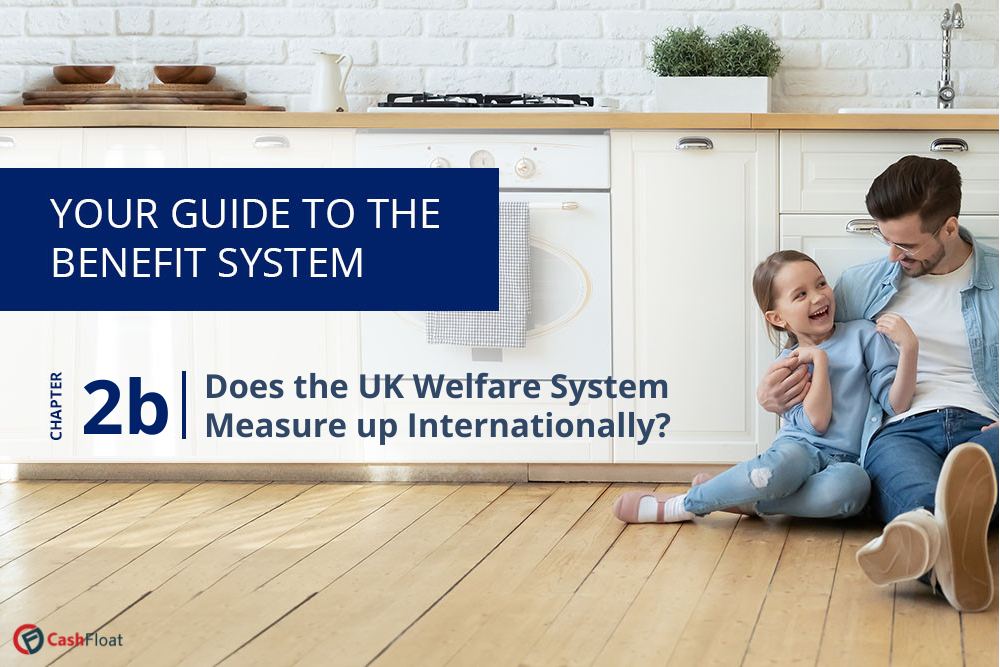 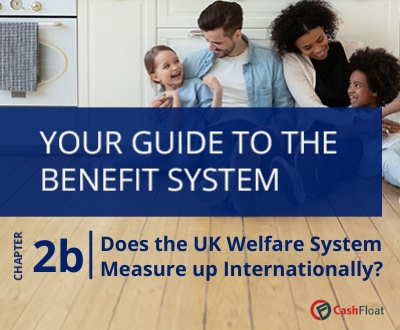 One of our politicians’ most frequent boasts is that welfare provision in the UK is the most generous in the world. Indeed, many other industrialised countries closely imitated the changes that were implemented following the Beveridge Report at the time. But, how generous would you consider the UK welfare system in 2021? Are we still the envy of the world?

In this article, we will consider the results of a survey of welfare provision in countries across the world. How did the UK rate in this study? Are other country’s systems better? Are they compatible with British culture and society, and could we implement any foreign ideas in the UK? Cashfloat has some answers.

The Organisation for Economic Cooperation & Development (OECD) compare welfare provision in different countries by looking at the amount of social expenditure. In 2019 they released their latest figures, which looked at 38 countries and analysed how much each country spent on public health, pensions and other forms of welfare, using Gross Domestic Product (GDP) to provide an equal comparison figure.

How well did the UK do in this comparison? Was it the best welfare country? In the Top 10? No, we came right in the middle at 17th. The Top 5 were France, Finland, Belgium, Denmark and Italy.

Some people have complained that the comparison is unfair. In some countries, the government gave money for private healthcare (instead of providing a National Health Service), which is more expensive and boosted their figures. However, the figures are telling and if you look at total public expenditure on social protection, then the UK only reaches an average position. While this may be good, it is still not ‘the most generous’ in the world.

FAQ’s about how Welfare is used in the UK

Are the numbers of people claiming Jobseeker’s Allowance going up or down?
In 2012, unemployment reached a high point and 1.59 million people were claiming Jobseeker’s Allowance. By 2020, this figure had dropped dramatically to 337,175 and then increased in 2021 due to many people losing their jobs as a result of the pandemic. While the overall unemployment rate has dropped in the UK due to improvements in the economy it is also due to factors which disguise unemployment.

What are the figures for the number of young people who are unemployed?
According to the UK government, youth unemployment (people aged 16-24) was 12.1% in January 2020 (compared to 43.9% in Spain and 34% in Greece). The EU average youth unemployment rate is 17.6%. (These figures have all increased as a result of the pandemic)

How many people in the UK are classified as long-term unemployed?
The number of long-term unemployed (people who have been looking for a job for over 12 months) in the UK is 1% as of July 2020. These people find themselves in an extremely difficult financial situation, often relying on payday loans online and loans for people on benefits to survive.

How much does the UK spend on welfare for every citizen?
According to the Office for Budgetary Responsibility, in 2017 the UK government spent around £8000 per household on welfare (or £3255 per person). This figure was similar in a more recent spending summary of 2019.

Restrictions in the UK Welfare System

The Benefit Cap and the Welfare Cap

The benefit cap was introduced in 2013 as an attempt to limit government spending on benefits by limiting the total amount that a person can receive in benefits.

The idea behind the benefits cap was that no claimant should be able to receive more in welfare than the average earnings of a typical worker. As of 2016, the limit to the amount that a person can receive in benefits in London is £23,000. Outside of London it is £20,000.

Both of these measures have led to a restriction in the amount that individuals and society as a whole can receive in benefits. 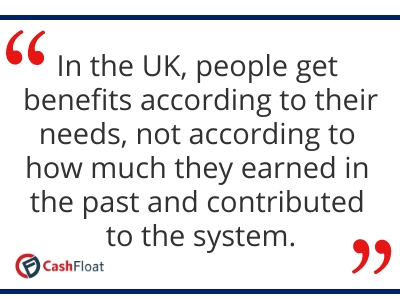 The difference in welfare provision in different countries is partly due to the way the governments calculate the amount that individual people can receive in benefits. While the UK does provide benefits, there are greater limits to those benefits than in some other countries. In the UK, people who receive benefits are normally allocated an amount according to their needs, rather than according to how much they previously earned and contributed to the system.

Some other countries do not calculate an amount to be given to the unemployed and disabled according to their circumstances as the UK system does. Instead, payments are awarded on a sliding scale according to how much the claimant received as a salary before they became unable to work. This can make for much more generous unemployment or disability allowances.

Another place where many people believe that the UK falls short of more generous countries is in the provision of public services, such as education, public transport and recreation facilities.

Data provided by Organisation for Economic Cooperation & Development (OECD) shows that the UK government spends less than the EU average on economic affairs, education, general public services, recreation facilities and public protection. While the UK may match or sometimes exceed the average spending of EU countries in some aspects of social provision, generally we invest less in public services than EU countries.

In France, the unemployed are given an average of 57% of their previous salary and can be paid up to €245.05 per day, while someone who is unable to work because of ill-health or disability is given 50% of their average salary over their highest ten years of earnings. This is a better alternative for unemployed people who may otherwise end up borrowing money to cover their expenses. In contrast, Germany’s welfare system has a similar scheme calculating the unemployment benefit as 2/3 of their salary if they have children and 60% if they are childless. Italy is also generous, giving 75% of an unemployed person’s salary over the previous two years up to a certain limit. 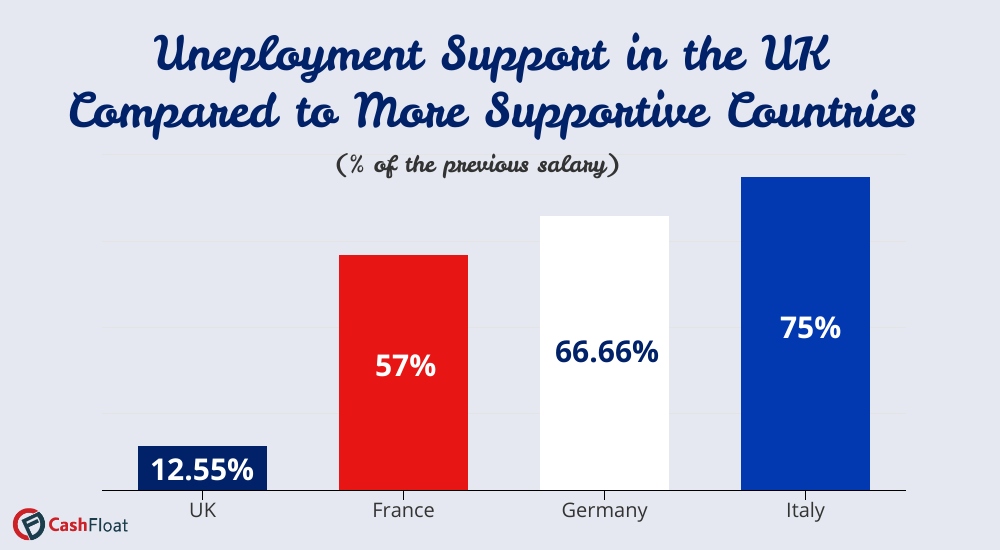 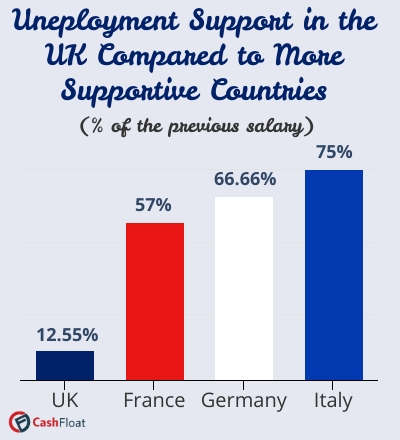 Another reason why the amount of welfare provision in the UK compared to other countries seems disappointing is that high earners in many European countries (especially from the public sector) receive extremely generous pensions. A report by the World Economic Forum cited the UK’s pension scheme as one of the least generous in the world. However, it must be noted that in the UK it is common for people to invest in private pension plans and to retire quite comfortably. On top of this, in 2018 the government made it mandatory for employers to enrol their staff into private pension schemes into which they would also contribute, unless their employees opted out.

To protect public finances and to encourage people to work, most European countries stipulate that workers should have made a certain number of National Insurance Contributions or worked a specific number of years before they can receive benefits. After a particular time benefits also stop when a person is receiving them. If people are still unable to find unemployment at this time or they had no recent employment before needing benefits they are usually still eligible for a ‘safety net’ flat-rate payment, although this is not nearly as generous.

Alternatives to the UK Welfare System

The main challenge facing most developed countries is how welfare spending can keep pace with demographic changes, particularly as life expectancy increases and the population ages. The welfare system must also adapt in other ways as the needs of society change. Was the welfare state a ‘child of its time’, designed to solve the particular problems the UK faced in the 1940s? Should we be considering alternatives which are more modern and can keep pace with change?

Could the foreign systems shown here work in the UK? Implementing these alternative systems, in some instances, would cause havoc in British society. For example, in Singapore, elderley parents can sue their children for support if they are not taking adequate care of them. This prospect might cause a lot of worry to people in the UK who expect their parents to support themselves with their pension. You could even end working to support your mother in-law! In the Netherlands, it is permissible to take up to 2 years sick leave. This might come as a shock to many people in the UK who suspect laziness is the cause of much sick leave.

So while the UK welfare system may not be the best welfare country, it might still be the best system considering the unique make-up of British society and culture.

Questions about Implementing Foreign Welfare Systems in the UK

How much is unemployment benefit worth in different countries?
In the UK, the maximum amount an individual can receive in Jobseeker’s Allowance is currently £74.35 per week or £3,866 per year. According to the ONS, this is 12.55% of an average annual salary in the UK. This compares to France where, on average, people receive 57% of their normal annual salary.

However, it should be pointed out that on top of Jobseeker’s Allowance, the unemployed in the UK may be able to receive benefits through Universal Credit, Child Benefit, Council Tax Support or Disability Allowance.

How much will worldwide populations age over the next 30 years?
According to ONS, by 2050, one in four UK residents will be over the age of 65. This compares to one in five, at today’s level. Across the world, the average age of a person is now 30 years and this is expected to increase in future, with developed countries being most affected by ageing populations.

Would those on the poverty line be able to save 20% of their income as the Singapore model recommends?
According to research by ONS, 10% of households with the lowest disposable income spend 42% of their income on the basics (food, transport, housing and household power). With everything else on top of that, it seems unlikely that they would be able to save 20% of their income. Around 10 million households in the UK have no savings at all, meaning that if an unexpected expense crops up they have nothing to rely on.

Chapter 2a:
Pros and Cons of a Welfare State

Becky Hall
Becky never thought she would be a financial blogger. But Fate arranged that Becky had to put her accounting degree on the back burner right after she graduated with a first in Business and Accounting. While doing bookkeeping as a freelancer for private clients, Becky noticed how many cashflow problems can be solved with a little bit of education. Trying to keep her clients out of debt, Becky began writing resources which she distributed to clients. What began as writing advice for clients evolved into a passion and now Becky found her platform at Cashfloat. When she isn’t writing, calculating or budgeting, Becky can be found at her piano playing something classical.
Related posts
Cashfloat News
Government’s ‘Eat Out to Help Out’ Scheme Resulted in an Immediate 41% Spike in Payday Loan Applications, A Report Found
Money & Borrowing
Coronavirus Government Help Schemes
Money & Borrowing
Zero Interest Loans to be Piloted in the UK