A Guide to the Welfare System in the UK – Chapter 3

Having a baby is an exciting time. But it can also be expensive. Understanding what your rights are for maternity pay is vital for your financial stability. Read on to find out more. 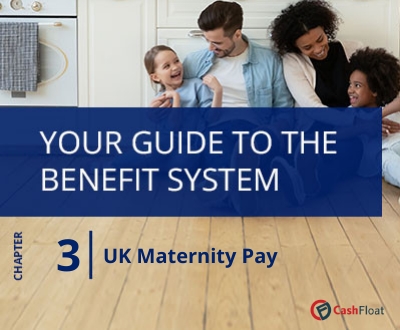 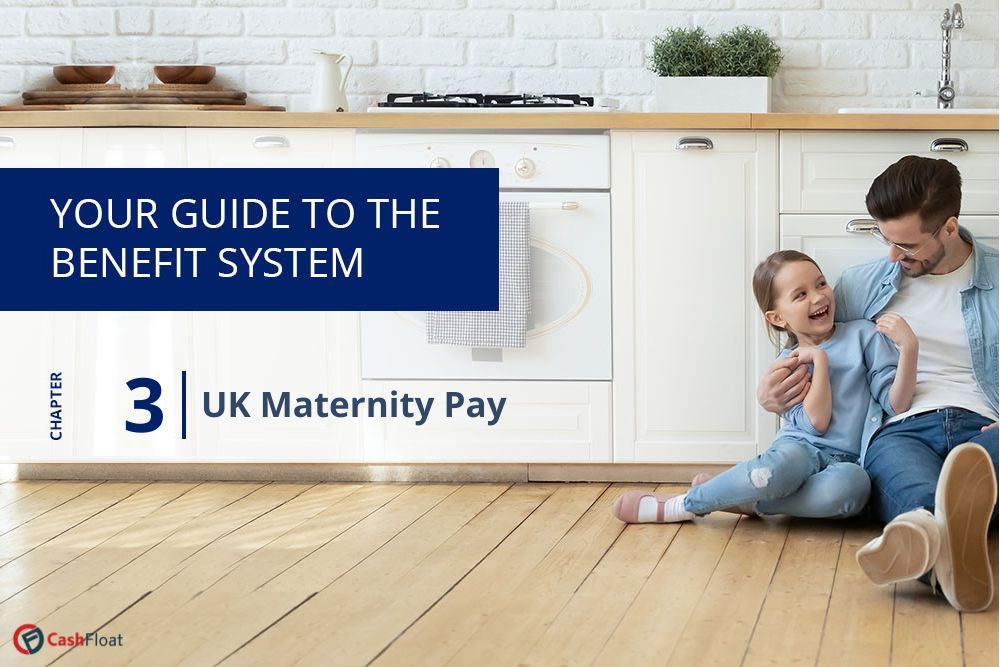 Recently, a UNICEF report ranked the UK as one of the worst countries for parental leave, out of 41 European and OECD countries with a similar level of wealth. They found that the leave and pay which the UK government provides to new mothers ranks very low when they looked at the evidence. On top of this, paternity leave in the UK is poor and childcare costs are high, which makes it more difficult for mothers to return to work to cover the poor maternity pay provisions.

The UNICEF report ranked 41 countries according to their provision of maternity leave, paternity leave and the level of enrolment in childcare. The UK came 27th out of 41 countries. The only European countries to come below the UK were Greece, Cyprus and Switzerland.

Maternity Pay and Leave Amounts in the UK

Currently, when they give birth, mothers in the UK can get to 90% of their average weekly earnings for 6 weeks under Statutory Maternity Pay. For 33 weeks after that, they either continue to get 90% of their pay or £151.97 a week, whichever is lower. For most women who work, the amount of £151.97 is lower and that is what they receive.

Other countries offer higher rates of maternity pay for much longer than six weeks. For example, in Norway mothers get full pay for 45 weeks and in Sweden they get it for 35 weeks. In Estonia, mothers get full maternity pay for 85 weeks. In many countries, three or four months is the standard. Many European countries also offer relatively generous paternity leave, whereas in the UK paternity leave is only 2 weeks and most fathers only receive £151.97 per week.

When it comes to the total amount of leave, new mothers may take 52 weeks maternity leave, but 33 weeks of that are relatively poorly paid and if they choose to take the full amount, then the last 13 weeks will be completely unpaid.

In terms of time allowed, 52 weeks is actually a relatively long period of leave. In 2019, when the UK was a member of the EU, this was the second most generous allowance in terms of time. However, many mothers can’t afford to take the full amount because the money they receive is not enough to cover their expenses. 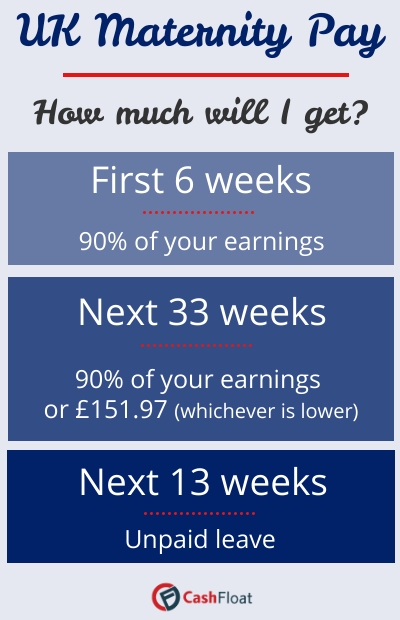 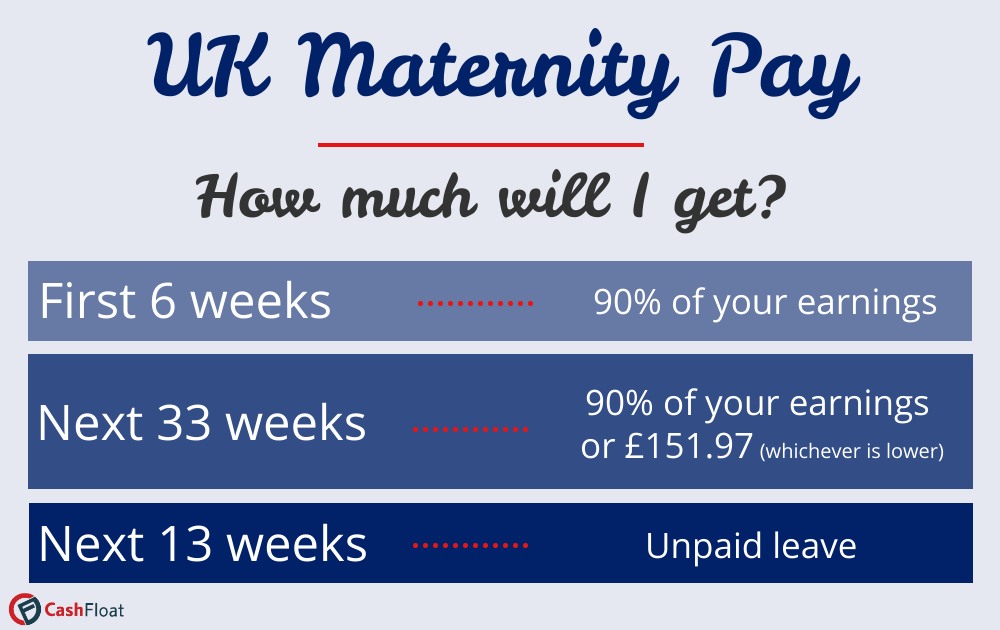 Are Some People Not Eligible for Maternity Pay?

An additional factor to take into account is that some women are not eligible for any Statutory Maternity Pay at all. Women who earn under £120 a week on average are not eligible for maternity pay. They also have to have worked for their employer for at least 26 weeks and provide 28 days notice to their employer before they start to receive maternity pay.

The Financial Impact of Living on Maternity Pay

While the first six weeks of maternity pay is paid at 90% of a woman’s normal wages, a great deal of women will take a huge pay cut after that time when they begin to receive £151.97 per week. This is an annual total of only £7,902. Imagine trying to live off that. A woman on an annual salary of £18,000 would have twice this much per week after paying taxes.

Of course, returning to work does provide some financial relief, although many new parents find that the cost of childcare adds a new pressure to their expenses. This is also an area where the UK ranked low in UNICEF’s comparison of parental provisions across EU and OECD countries.

There are people who are trying to change things for new mums, such as the charity Maternity Action. They are the leading charity committed to ending inequality for pregnant women and new parents. They aim to change the low rates of maternity pay in the UK and they call for an increase in the flat rate of maternity, paternity, and shared parental pay to the national minimum wage. On top of this, they point out that while the UK government offers a long period of maternity leave compared to other European countries, those countries actually offer other forms of leave for parents which increase the total amount of leave that they offer.

Maternity Action has conducted research into how cuts to maternity benefits, which have been made in the last 10 years, have affected mothers and their families. The cuts which have been made largely relate to Child Tax Credit, Child Benefit, and some other pregnancy-related benefits. On top of this, they also noted that Statutory Maternity Pay and Maternity Allowance have risen at below-inflation rates. While the cost of living has risen, the main benefits which mothers receive have not kept up.

They claim that the cuts to maternity benefits and the below inflation rises in payment amounts exacerbate what are already high rates of poverty in new families. Among other things, they reduce the chances of fathers being able to take parental leave. In turn, this puts more caring responsibility on mothers and entrenches the gender pay gap as men are encouraged to progress more in their careers at a stage when both parents should be spending time with their new child.

Maternity Action’s report on the effects of benefit changes on new families cites a study by Family Action, which shows that in 2010 more than four in ten families were in debt while mothers were on maternity leave. The average amount of debt then was £1,329, with many accruing this debt through payday loans. Since 2010, not much has changed and, while no new studies have been made since then, it is likely that new families are still getting into debt at the same rate.

People on low incomes are already more likely to go into debt, and women are more likely to be in low-paying jobs. Taking maternity leave can exacerbate an already difficult financial situation and the government has done little to address this problem in recent years.

Mothers on maternity leave are thought to be more likely to take out payday loans due to the difficult financial circumstances that they face. Although the first six weeks of maternity leave provides a reasonable income, the small amount that most women receive for the rest of their leave often causes financial trouble. Some women return to work as soon as they can, but even then, the gaps in their finances left by their time spent on maternity leave can require the use of payday loans as a cover. Some women end up in a situation where they are unable to return to work because of the cost of childcare and use loans to support themselves.

The UK might offer a good deal of time off for new mothers, but the pay given doesn’t stack up when you compare it to other countries with a similar level of wealth. Improvements to Statutory Maternity Pay could help new mothers and their families to ease their financial worries and could allow mothers to take more time off than they currently do.

Click here to view our infographic on how to budget when expecting a baby.

Chapter 2b:
Is the UK the Best Welfare Country?

Chapter 4:
Benefits to Cover the Cost of Children

Becky Hall
Becky never thought she would be a financial blogger. But Fate arranged that Becky had to put her accounting degree on the back burner right after she graduated with a first in Business and Accounting. While doing bookkeeping as a freelancer for private clients, Becky noticed how many cashflow problems can be solved with a little bit of education. Trying to keep her clients out of debt, Becky began writing resources which she distributed to clients. What began as writing advice for clients evolved into a passion and now Becky found her platform at Cashfloat. When she isn’t writing, calculating or budgeting, Becky can be found at her piano playing something classical.
Related posts
Cashfloat News
Government’s ‘Eat Out to Help Out’ Scheme Resulted in an Immediate 41% Spike in Payday Loan Applications, A Report Found
Money & Borrowing
Coronavirus Government Help Schemes
Money & Borrowing
Zero Interest Loans to be Piloted in the UK